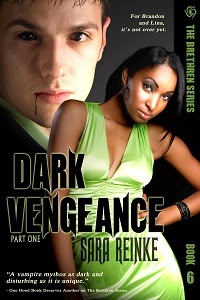 Brandon Noble thinks the worst is behind him and is ready to begin a new life with the woman he loves. Lina Jones is more reluctant to let bygones be bygones, but agrees to try for Brandon's sake. But just as they look forward to a promising future together, new danger arises -- and Brandon's very nature could threaten to tear them ruthlessly apart.

Lina had never seen Brandon so fully enthralled by the bloodlust before—not without him feeding from her or finding sexual release. It had left him exhausted, flustered and—she realized suddenly—frightened.

“Brandon,” she whispered, reaching up to press her palm to his cheek. God, he was burning up, his skin hot like the side of a glassworks furnace. “Feed from me.”

Don’t ask me that, he gasped, shaking his head. God, Lina, please. I can’t!

It has to! he cried. Shaking his head his head to dislodge her hand from his face, he then seized hold of her, locking his fingers through hers, pinning her hands down against the bed. You don’t understand, he seethed, his brows furrowed. He leaned down enough for her to see herself—her sudden, visible alarm—reflected in the obsidian pools of his eyes. This has to work—it has to. If I bite you now, I won’t be able to stop. Do you get it? Do you hear me? I won’t be able to stop myself! 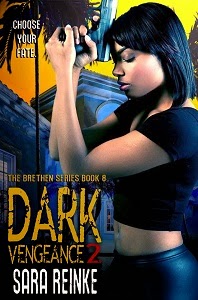 From the beginning, it's been the two of them: Brandon Noble and Lina Jones, against the world...against all odds. But in the end, Brandon couldn't resist his true vampire nature, and the relentless pull of the blood lust drove them apart. Now he's disappeared without a trace and his life may very well be in danger. Can Lina put aside her broken heart to help find the man she loves? Or does Brandon's salvation lie in the hands of the most unlikely hero of all?

Brandon lay spooned against Lina, his chest facing her back, the curves of her body resting in perfect complement with his own. Her hair, a tousled mess of dark, springy curls, tickled the underside of his nose. He had his hand draped lightly over the slim indention of her waist, his fingers loosely twined through hers.

I don’t understand this—any of it, Brandon thought. But he found he no longer had the heart to question it. Because this is what I want—you’re what I want, Lina, he thought, breathing in the scent of her perfume, and kissing her lightly through her hair. You’re what I need.

Although he was loath to leave her, he slowly drew free from their embrace and slipped out of bed. Leaving her curled on her side, her body draped in blankets, he pulled on a pair of jeans and a T-shirt. Grabbing his cell phone, Brandon padded softly toward the bedroom doorway. Here, he paused, glancing over his shoulder, watching as she dozed, cat-like and comfortable, in a sunbeam.

God, you’re beautiful, he thought, the corners of his mouth lifting in a soft smile. I want this every day, for the rest of my life. I want you.

He wandered through the chateau, and everything was just as he remembered. It had come pre-furnished, courtesy of the Morins, but Lina had added her own touches here and there to the décor: a tabletop sculpture of a moose made from old paint cans, springs and cogs in the living room bought during an outing to an art gallery with Tessa; a framed photograph of her and Brandon taken outside one of the gaudy casino exteriors on the Nevada side of the lake; a bowl of giant pinecones—each bigger than a softball—she’d collected from the yard outside. He gazed out the bay windows in the living room and found everything outside just as he’d known it, too—flawless azure sky, clustered stands of towering evergreen trees, the distant but distinct cerulean plane of Emerald Bay below.

It was a beautiful place, a peaceful place, and as it always did, it made Brandon feel at ease simply to be there, bearing mute witness to its splendor.

He sat down on the couch and looked down at the cell phone in his hand. Again, it occurred to him—floating to mind, as if something rancid bobbing briefly to the surface in a murky pond—that the phone was supposed to be lost.

When Jackson moved out of his mother’s house in Florida, he thought. His head hurt, a sudden burst, a throbbing ache just behind his eyes, and with a frown, he pinched the bridge of his nose. Only I didn’t go to Florida. So I couldn’t have lost my phone there. Besides… He opened his eyes, blinking down at the iPhone in his hand. …I have it right here. That’s proof I didn’t lose it.

He opened his messages as Lina had done, and felt his heart quicken with excitement as he saw Sebastian’s name and number pop up. If losing his phone had been just a dream, then…

hen losing my dad must’ve been one, too, he thought, tapping on the touchscreen keypad, and typing a message: Hey, Dad—are you busy?

For a long moment, he couldn’t send the message, even though he knew it was ridiculous to hesitate. The idea that Sebastian was gone had been so powerful and poignant within him; to realize now that he wasn’t, that Brandon could have another chance—countless chances—to talk to him, text him, interact with him was damn near overwhelming.

But almost as soon as he pressed send, the phone vibrated in his hand, not because Sebastian’s response had been so quickly forthcoming, but because a dialogue box had appeared onscreen: Signal lost. Message not sent. Please try again.

What? With a frown, Brandon held up the phone: no bars, no signal, no reception. He rose to his feet and walked closer to the windows, but still had no luck. He moved around the house, going from room to room; he turned the phone off and on again, but no matter what he tried, he couldn’t get a transmission signal. Shrugging on a lightweight jacket, he stepped out onto the deck to see if the reception was any better. But it wasn’t.

Damn it, Brandon thought with a deepening frown, as he glared, frustrated, at the impotent phone in his hand. It had apparently worked last night—there was the conversation he’d had with his father right there on the screen to prove it. But still, Brandon had no memory of that conversation, not even the distant, dream-like sort in which Sebastian had died, or that he had lost his cell phone. That utter lack of memory did more than trouble Brandon. It pained him.

Because I feel cheated somehow, he thought, as ridiculous as it sounded. He felt desperate now to get in touch with Sebastian, to prove to himself that this was reality, and everything else—all of the half-memories bobbing and percolating in the back of his mind—were dreams. I want to talk to my dad. Even if it’s only through a stupid goddamn text, I want to talk to…

All at once, Brandon’s attention snapped from the phone in his hand to the woods, his brows narrowing, his entire body growing instantly tense. He could sense another Brethren, that distinctive, tingling sensation that meant another like him was nearby. Normally at the Morin compound, this wouldn’t have alarmed him because the only ones there were Brethren. But in that moment, as he felt that unmistakable awareness of other Brethren within his proximity, he realized he hadn’t been feeling it all along as he’d grown accustomed. It was like the entire area was completely empty, at least of other vampires—until now.

Below him, through the tangle of trees, Brandon saw him, a Brethren man looking up at the bungalow—most specifically, at Brandon. His eyes were a clear, nearly lucent shade of blue, like the waters of Lake Tahoe. He reached for Brandon as if desperately imploring, his fingers splayed wide, and his arm had been stripped of any visible flesh, flayed so that the bright red meat of his muscles lay gruesomely exposed. Blood spattered in fat droplets onto the floor and the stark white sheets beneath him were stained scarlet.

Please… the man gasped, and Brandon knew his face, his eyes—his name. 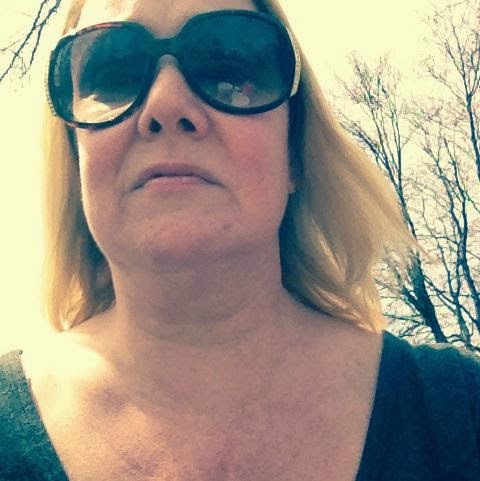 New York Times bestselling author Karen Robards calls Reinke “a new paranormal star” and Love Romances and More hails her as “a fresh new voice to a genre that has grown stale.”

Dark Thirst and Dark Hunger, the first two books in The Brethren Series of vampire romance are available from Kensington/Zebra Books, while the third installment, Dark Passion, is available from Double Dragon Publishing.

Learn more about Sara and her available titles at www.sarareinke.com

2 ebook sets of the entire The Brethren Series