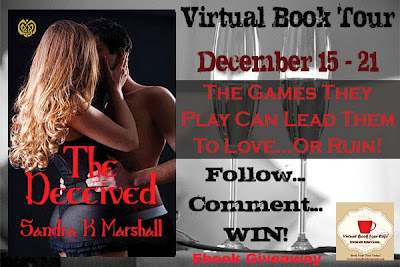 The Deceived
by Sandy Marshall

Sandra grew up in the mid-west in a small farming community where she belonged to 4-H. When she was thirteen, her family moved to, Lawrence, Kansas, the town where the University of Kansas thrived. After high school, she traveled to California to live with a friend and to find a job. She became very homesick and returned home.   She worked for a major airline for thirty-six years and did extensive travel during that period. It was a lovely time in her life working for a wonderful company. In 1999 she retired to write full time and worked seriously toward publication.   In 2008, she had her first book published, and then her second one in 2009. Shortly after her publisher closed their doors, and she immediately moved to a new publisher. She is still with the publisher and has had three books and a novella published with them. She has just contracted a short story with them titled Hitting Bottom, and is working on another short one. 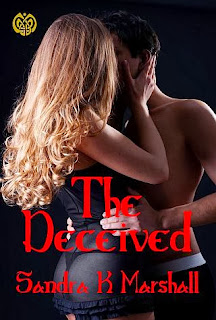 Publisher: Eirelander Publishing
Release Date: October 25, 2013
Amazon
Book Description:
The games they play can lead them to love or ruin.
Melanie Dubois detests her family’s casino business. The way this addiction destroys people has her on a tear of magnificent proportions. Then again, this young lady has been put through a train wreck of her own design. She distrusts everybody except for the people who are determined to use Melanie as a poster-child for zealots.
Mike Mercer has spent nearly a year in a deep cover mission for the FBI. The one fly in the ointment of completing his objective to take down a group of dangerous anti-gambling zealots is a fiery-tempered, blonde-haired woman named Melanie DuBois. Worse than that, she’s got a passion brewing just beneath the surface that’s an even deadlier attraction.


Fighting for your life is never easy when the odds are stacked against you.


The man gave her the creeps. 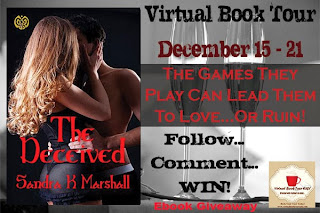