Author Interview & Giveaway: A Breath of Winter by Hailey Edwards 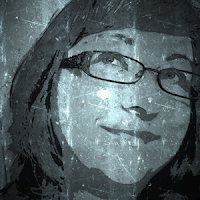 Born in the Deep South, Hailey is a lifelong resident of Alabama. Her husband works for the local sheriff’s department and her daughter is counting down the days until she’s old enough to audition for American Idol. Her doxie, Black Ilex, helps Hailey write by snoozing in his recliner in her office.

Her desire to explore without leaving the comforts of home fueled her love of reading and writing. Whenever the itch for adventure strikes, Hailey can be found with her nose glued to her Kindle’s screen or squinting at her monitor as she writes her next happily-ever-after.


Do you plan everything or just let the story flow?

I’m definitely more of a pantser than a plotter.

Frequently. The easiest thing is just to let them have their way.

I don’t have one favorite of either. I do love Jim Butcher, Ilona Andrews and Patricia Briggs.

Blurb of your latest release or coming soon book 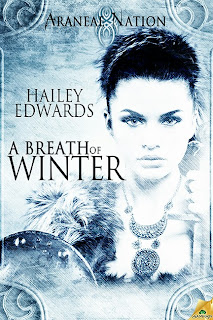 
There’s no easy cure for a love of epidemic proportions.

Zuri and her mercenary brothers had a simple mission. Transport a captured harbinger to Erania and collect the bounty. But this job turns out to be anything but easy
.
Their welcome to the northland is nothing short of frigid. A scuffle with border guards and her prisoner’s attempted escape leave Zuri injured—and she and her brothers stuck in quarantine. Worse, the bounty comes with silken strings attached. Strings held by a scientist with a daring, dangerous plan.

Because Zuri and her prisoner barged in before his fail-safes were in place, Henri had no choice but to lock them all down until he’s sure there’s no risk of spreading plague. He’d planned to study the harbinger, but it’s the mercenary holding the leash who intrigues him the most.

When Henri’s experiment goes awry, they learn they’ve all been pawns in a plan with one goal: bring the Araneae Nation to its knees. Zuri is forced to make a choice that could sign her death warrant—or sacrifice everyone she loves.

Warning: This book contains a chair-bound heroine who won’t let anyone—least of all a man—push her around. Expect tea-drinking, net-tossing, and knife-wielding. Should you feel compelled to indulge in a bear ride, please keep your hands on the reins and your feet in the stirrups. Author not responsible for possible maulings.


The bed was narrow and slender, the frame simple. A heavy chair sat in the corner beside an old table strewn with books. Papers littered the floor in that corner. Clothes were piled beside the door. Plants in metal stands lined one wall, and the smell of herbs filled the space. It was a nice room. It reflected the studious male who slept there, but I had trouble imagining this as his bedroom suite.

As a brother of the maven, I expected more gold, more ornate carvings, more…everything.

“Is it not what you expected?” Henri waited until Edan claimed a seat before sitting on his bed.

Since I had my chair, I could hardly complain I had not been offered a position first.

Nape prickling from being confined to a cramped space with Edan, I kept my back to the door and him in my periphery. Henri was fading, and the last thing I wanted was to be alone with Edan.

“It must be a good sign if she has imagined how your bedroom looks at all,” Edan said.

I ignored him. “I admit I anticipated a grander room considering your position.”

Henri poured a drink and offered the glass to me. I declined. There was only one cup, and he needed the wine to wash down his meal. “The room my parents gave me is no doubt identical to the one you’re picturing for me. But I prefer staying close to the work.” He popped a square of cheese in his mouth after first offering a piece to me. “Tell me why you’ve come, Edan. How bad is it? What are Lourdes’s plans?”

“Bad is a relative term.” He settled into his chair and crossed his legs under him. “Your sister has been monitoring the situation for some days. She believes the city is safe from this threat and has decided to use this opportunity to study our enemy. Paladin Rhys issued orders to his guards to observe but not engage the risers. So far, there have been no sightings of the other creatures.”

“Harbingers don’t like getting their hands dirty.” I explained, “They use risers for that.”

“Right now we’re working under the assumption the risers who made their way to Erania either followed the orders of a harbinger who elected not to accompany them, or they journeyed here under their own power.” Edan waited to see if I contributed my opinion. He surprised me enough that I did.

“There’s a harbinger nearby pulling their strings.” There had to be. “Whether it’s ours or a different one is the question.”

“What has been learned from observing them?” Henri asked.

“Not much,” Edan admitted. “The risers haven’t attacked the walls or tried entering the city, and so far they appear oblivious to the guards unless they are confronted. In fact, the only area where the risers are congregating is outside the stable hatch. For that reason, the bulk of the paladin’s resources have been redirected there as well as the other hatches scattered outside the wall, though the risers are content to charge the stable hatch rather than seek entrance elsewhere. They seem very simple to me.”

“Left to their own devices, they might be.” Too bad they had help. “Harbingers are the real threat. If one is spotted, warn your maven she is better off killing it before it sings the risers into action. When under a harbinger’s control, risers are made more vicious by their lack of thought and their strict adherence to their master’s orders. Observe the risers if you wish, but keep your eyes to the skies.”

“I will keep your advice in mind.” An indulgent note entered his voice.

“Is there anything else?” Henri set his empty tray on the floor, nudging it aside with his foot. Focused as I had been on Edan, I hadn’t noticed Henri clean his plate or drain his cup.

“Nothing of consequence,” Edan said. “You and I have discussed the rest.”

I gawked at him. “You risked infection to tell him that little bit?”

“I have been taking the same preventative medicine as Henri has. You said earlier you have faith in his skill. Perhaps you are not the only one who trusts him with their life?” Rising with his back to me, Edan lifted the cushion on his chair and withdrew a thin packet. “Once I leave, I swore to your sister I would not return to the nest until it had been purged of sickness and I was not at risk from or a risk to those inside. You and I—we may not see one another for some weeks.”

Henri shook his head. “I’m certain that wasn’t by design.”

“Marne isn’t used to living underground.” He shrugged. “She craves a good hunt.”

“Will you hunt the risers?” Though no one had said, they could hardly be left free to roam.

“They do not interest me.” Edan rolled his shoulders again. “Marne may think otherwise.”

“If she should become interested, take her outside the wall to the forest near the old vineyard. There are lepus there she can trap.” Henri held out a hand, and Edan set the packet on his palm.

“I may do that.” With a formal bow that suited him well, Edan said his farewell to Henri.

“Don’t let the door hit you…” I muttered as Edan passed.

His deep chuckle followed him into the hall.

When the door closed, Henri studied me. “Would you like me to escort you to your room?”

“No.” My fingers drummed my armrests until I noticed Henri’s habit in myself and stopped. “You need sleep. You’ve done too much and gone too long without rest. Head down. Eyes shut.”

After a brief hesitation, he tucked the packet away and did as I ordered, stretching out across his mattress. “What next?”

Subtle warmth in his voice lured me closer. “Stop squinting so hard and relax.” I rolled nearer to his bedside and ran my fingers through his hair. “There. That’s better.”

“I ought to send you away,” he murmured.

“Afraid of my brothers, are you?” I teased while scratching his scalp lightly with my fingernails.

He cracked one eye open. “Let me worry about your brothers.”

“I can’t make you any promises.” I admitted, “I worry about them constantly.”

He turned his head toward me. “I regret adding to your burden.”

“I mean it.” He stretched out his arm and rested his palm on my knee. “I should have done more than I did. If I had given your family the same consideration as I gave mine, we wouldn’t be here.”

“If I had read the fine print in our contract with Hishima, we wouldn’t be here either.”

His thumb stroked the inside of my thigh. “You can’t blame yourself.”

“I can’t blame you either.” It wasn’t fair. As my initial anger faded, I began to see that.

I was angrier at myself for being led so easily into Hishima’s trap than at Henri’s actions.

I thumped the crown of his head. “I wouldn’t go that far.”

He reached up and rubbed his scalp. “How far would you go?”

“This far.” I leaned over, used my finger to tilt his face and kissed him.

Any websites/places readers can find you on the web.

To win the ebook of Breath of Winter, please leave your email address and format of choice in the comments section. Winners will be selected on Dec 15th.