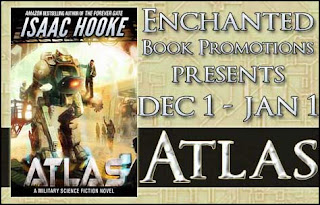 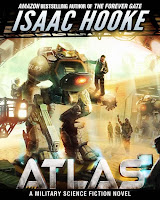 Rade Galaal enrolls in the hardest military training known to man to become a member of the MOTHs, the most elite fighting unit in the galaxy. MOTHs are tacticians, corpsmen, snipers, astronauts and commandos rolled into one. They also happen to pilot the atomic-powered ATLAS mechs, specialized military hardware that brings new meaning to the phrase "one-man-army."

When Special Warfare Command orders MOTH Team Seven on a covert operation 8,000 light-years beyond the furthest reaches of explored space, Rade realizes he's signed up for more than he bargained for...

"Hey Tahoe," I said. "Bet you wish you could grow a chin rug like this, huh? Maybe I should snip off a piece for you? With some glue and a little creativity we could give you some decent facial furniture. You'd look very manly."

"My genetics," Tahoe said, sighing. "I'll never live them down."

I didn't turn to look back at him, and from the muffled sound to his own voice, I knew that he hadn't glanced back from his own defensive position by the doorway either.

I waited a few more minutes, passing my rifle's site from house to house, and finally the frustration of having no targets got to me.

I turned to Alejandro. "Well, it's been about three hours. Your turn big boy."

Alejandro rubbed his eyes. "How many did you get?" he said.

"Mmm." Alejandro relaxed into a sniping position on the bedroll, eye on his scope.

I closed my eyes and after about ten seconds I heard him fire.

"Hey," Alejandro said. "Not my fault if the bad guys
decide to show themselves when I'm on watch."

"Maybe they find Alejandro more attractive," Tahoe said behind me, from his position by the door.

"Now you're talking my kind of language baby." I sat up and gave Tahoe a fist bump.

"Well, if that were true," Alejandro said. "Then Tahoe would be getting all the baddies."

"Who says?" Alejandro pressed. "Have you tried asking your wife?"

"Hell no. She'd be the first person to tell you I'm ugly."

"Then why did she marry you?" Alejandro said.

Alejandro chuckled. "That's fine, that's mighty fine. But it's not going to help you in the end. You do know that the divorce rate for MOTHs is ninety percent, right? What do you think your mamacita's doing back home right now? When the cat's away..."

"Hey." Tahoe stood up. "Don't you be talking about my wife like that."

Alejandro shifted beside me. "Relax bro. I was kidding. Of course she's keeping all alone and to herself right now, raising those kids of yours. Of course she's not giving the plumber a special bonus payment involving lube and latex."

"That's it!" Tahoe locked his M60 and sloughed it off his shoulder.

I sat up. "Get back to your post Tahoe. Get right back. Do your job."

"Well tell him to quit provoking me," Tahoe said, picking up his M60 reluctantly.

"He's just mad because I'm getting all the baddies," Alejandro said.

I made my voice as stern as possible. "Stop provoking him, Alejandro. Now."

"Every second you take your eyes away from the scope is a second one of our guys could die. Remember that, Alejandro."

He shook his head, and put his eye back on the rifle site.


Isaac Hooke is the author of the upcoming military science fiction novel, ATLAS. His experimental genre-bending action novel THE FOREVER GATE was an Amazon #1 bestseller in both the science fiction and fantasy categories when it was released in May 2013.

He's been writing since 1997, and he has a degree in Engineering Physics.

ATLAS comes out Christmas 2013. Sign-up to be notified here: http://bit.ly/atlaslist

In the meantime, you can read "Just Another Day" -- a short story set in the ATLAS universe, here: