Book Spotlight & Giveaway: I Believe…A Ghost Story for the Holidays 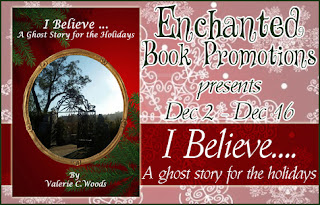 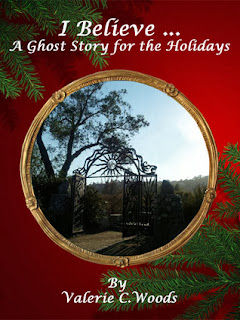 Was Marley & Scrooge the only ghost-to-human intervention ever? This is the question. Marley’s haunting, and the arrangement he made for Scrooge had a far-reaching and beneficial effect.

Surely, poor Jacob Marley’s ghost found some peace for being such a compassionate medium. Further, it would be nice to believe that attempts at interventions like this occur with some frequency among unfulfilled spirits. Even now.

“I Believe… A Ghost Story for the Holidays” is a contemporary holiday romp through a Los Angeles neighborhood that invites the reader to join three wandering spirits hoping to transition to the light by New Year's Eve. But it will only happen if each of them can cure a human heart of their Scrooge-like tendencies to become more loving and charitable citizens of the planet.

Tonight the Festival was free of cars. Pedestrians and cyclists meandered through the multi-colored lights of the welcoming arch, through blinking light displays of depictions of L.A. landmarks, and a slew of Santas, Elves and the occasional Menorah. As they approached the tunnel of lights, the pop music soundtrack of Christmas favorites came to a grinding halt.

The music shifted to a definitely Celtic beat. This section, under the tunnel of lights was paved with what looked like hardwood flooring. Then in a flash of light, there was Lucas, sliding onto the boards, as if skating on ice and the dance begins. By ones and twos, other dancers emerged from the crowd, joining in the syncopated rhythm of toe taps, drags and stomps, interspersed with slides, splits, and jumps. The crowd, moved back as the number of dancers increased. They moved with carefree abandon. Especially Lucas.

And Ramsey could see the joy. He recognized that joy. “You see that, Ram! That’s your boy.  Look at him…you used to have that kind of joy, remember?” And finally, Ramsey could see Sara’s apparitional form, glimmering through the unshed tears crowding his eyes. His smile at the sight of her was brilliant. The light he had tamped down for years, burst forth and connected with Sara’s luminescence and the unshed tears fell.  “And he’s good!”

Ramsey nodded.  The words wouldn’t come just yet.  He was getting re-acquainted with his joy. Sara glowed with her own joy. “Ramsey, you don’t have to agree with his dreams. You just have to believe in him.”  Ramsey nodded again. She moved closer to him, caressed his face with both her hands. “And don’t forget about you, Ram.” He managed to croak out a response.  “I do, Sara. I believe in both of us.”

Sara felt the light of their souls expand and embrace. And then, once again, Sara couldn’t help herself. She moved to her Lucas and followed him in the dance.  Her form reflected the multi-colored lights, like a kaleidoscope of light surrounding him. It was breathtaking. Ramsey watched the lights of his life together once more and laughed a laugh of pure bliss.

As the music reached its crescendo, Sara spun out of the dance and came face to face, not with Ramsey, but with the wildly staring face of Simon… it was quite a shock for Simon.  He never dreamed he’d see her again.  He took a step toward Sara’s form. She smiled the singular smile that had softened his heart and simply said, “Simon.”  Mesmerized, he took another step, but true to his nature, he then abruptly turned away. He ran away from the lights and headlong into the darkness of the park.

An avid reader while growing up on Chicago’s South Side, Ms. Woods began writing when, as a struggling actress in New York, she couldn’t find suitable audition material for women of color. This led her to write a book of audition monologues, Something for Everyone (50 Original Monologues). The book was initially self-published and is now published by renowned theatrical play publisher, Samuel French, Inc. (www.VCWoods.com)

After adapting an average play into a better screenplay, Ms. Woods was awarded a Walt Disney Screenwriting Fellowship and followed that up with writing and producing on network and cable drama series such as Under One Roof, Touched By An Angel, Promised Land, Any Day Now and Soul Food.

But fiction, her first love, compelled her to enter the world of prose. She had always written bits of fiction, short stories and a little poetry here and there.

In November 2012, Ms. Woods founded a micro-press: BooksEndependent, LLC (www.BooksEndependent.com) to support her work and the work of other new, independent authors of fiction and non-fiction.

The first title was Ms. Woods’ novella, I Believe... A Ghost Story for the Holidays. (Amazon.com) Then, what began as a gift became her second publication.

Several years ago, needing a birthday present for her sister Ms. Woods wrote a short story about a girl detective -- a highly fictionalized autobiography of the adventures she and her sister experienced in childhood. Another story was written for Christmas, then one for Mother's Day. That’s when Ms. Woods realized she was writing the kind of novel she and her sister would have loved to read as children, but which didn’t exist – the adventures of African-American Girl Detectives!
The result, Katrin's Chronicles: The Canon of Jacqueléne Dyanne, Vol. 1 is now available in paperback and Kindle edition at Amazon.com.