My ten most favourite books… there are way too many to choose. There are so many characters scrambling through my mind that I fell in love with. I can easily share which top 5 series I loved. I read these series back to back and they consumed me.

I would spend every spare minute I had reading this series. When I was out in the real world, I was people watching and sizing them up to meet my character needs. My family and I would go out to dinner and I watched a couple who to me were Locke and Emmy. My husband told me to stop staring. Lol

God how I loved these guys and their women. “Lucky’s Choice” was possibly my favourite book. Lucky was such a tortured soul and Willa loved him. But the music that’s suggested in one of the scenes is probably what made this book stick the most for me.

Great series of love finding its way back. This whole series is based on the characters being in a band, and I do love my music. My fondest memory of this series is when Josie child is creating Tattoos on Liam with marker. The guy is already inked up, what can a few more do, right?!

If you want to talk about two different series by one author, this is it. Sweet Home: love the character’s football star, geeky girl, conflict (book1) and Happy Ever After. Haden’s Hangman: I would be scared of these boys rolling into town. The twist of the cult aspect makes this a different read, but I like different.

Well I guess I am a big Kristen Ashley fan. I even ordered a T-shirt that says ‘Fortuum’s’ while reading Rock Chicks. I wanted to be one of them and have Tex making my grump coffee. I loved each of these series, and I loved some books more than others. The unique aspect I like about these series is how Kristen interconnected the stories which allowed a whole new series to start. 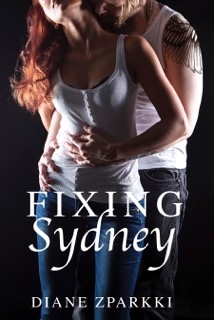 
Sydney Sommer’s world fell apart after senior prom. Since then, her life had become a constant loop of unfortunate scenarios that kept her in constant fear of what might be lurking around the next corner. Her trust in others was at a standstill. Even those who were closest to her were held at a distance.

After serving active duty overseas, Jaxon Triggs moved away from his hometown, hoping the change in scenery would help him build a new future for himself. What he wasn’t expecting was to fall for a girl who was broken.

From the first moment Jaxon laid eyes on Sydney, he was curious. He became determined to do everything he could to break through the armor Sydney held around her so securely. His instinct to protect her and keep her safe kicked in as the dangers she encountered became more personal.

With dread always looming close by and secrets discovered, would Sydney be able to handle the new changes in her life yet heal at the same time?

Diane Zparkki lives in the greater Toronto area. She is a working mom, and with her husband, she has raised three kids. She is a thrill seeker who usually drags her family along with her. She was never a big reader or writer in her youth—Coles Notes were her best friend through college. Her enthusiasm for reading came later in life when she joined a book club. She loved those books, but she wanted raw, simple, and happily ever after with a bit of get down and dirty. That was when her love for bad boys on a Harley was set in motion—it helped that her husband rides, too. After reading so many books, her mind started to create her first story, and she needed to get it out. Fixing Sydney of the Branson’s Kind of Love trilogy is her first book, and she hopes you enjoyed it as much she enjoyed having these characters running around in her head.