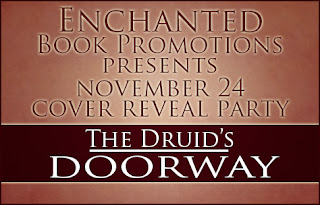 We’re happy to celebrate the cover reveal party today for “The Druid’s Doorway”, a YA urban fantasy novel by author SG Daniels.

Without further ado, here is the cover… 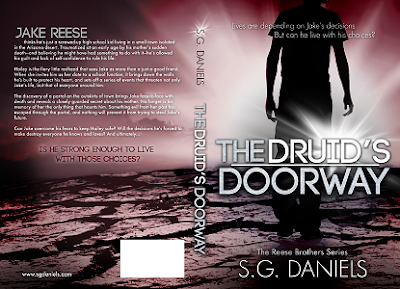 About The Druid’s Doorway

Jake Reese thinks he’s just a screwed-up high school kid living in a small town isolated in the Arizona desert. Traumatized at an early age by his mother’s sudden death—and believing he might have had something to do with it—he’s allowed his guilt and lack of self-confidence to rule his life.

Hailey is the fiery little redhead that sees Jake as more than a just a good friend. When she invites him as her date to a school function, it brings down the walls he's built to protect his heart, and sets off a series of events that threaten not only Jake’s life, but that of everyone around him.

The discovery of a portal on the outskirts of town brings Jake face-to-face with death and reveals a closely guarded secret about his mother. No longer is his memory of her the only thing that haunts him. Something evil from her past has escaped through the portal, and nothing will prevent it from trying to steal Jake’s future.

Can Jake overcome his fears to keep Hailey safe? Will the decisions he's forced to make destroy everyone he knows and loves? And ultimately...is he strong enough to live with those choices?

S.G. Daniels lives in rural Central Illinois with her husband of thirty-one years, and two spoiled cats, Payne and Jenks. She works full-time in a local medical facility as a patient accounting refund specialist. Most of her evenings she can be found in front of her computer, working on story ideas, or learning the ins and outs of the writing world. On the weekends, if she’s not spending time outside, she’s usually found nose-deep in a book. When S.G. unleashes her inner daredevil, she usually takes off through winding timber trails or country roads on the ATV. Her weaknesses are iced tea and pretzels, especially when she’s working on a story.