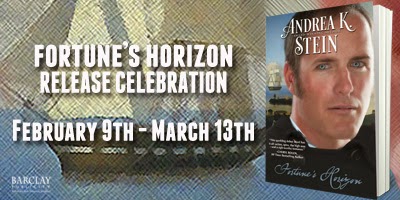 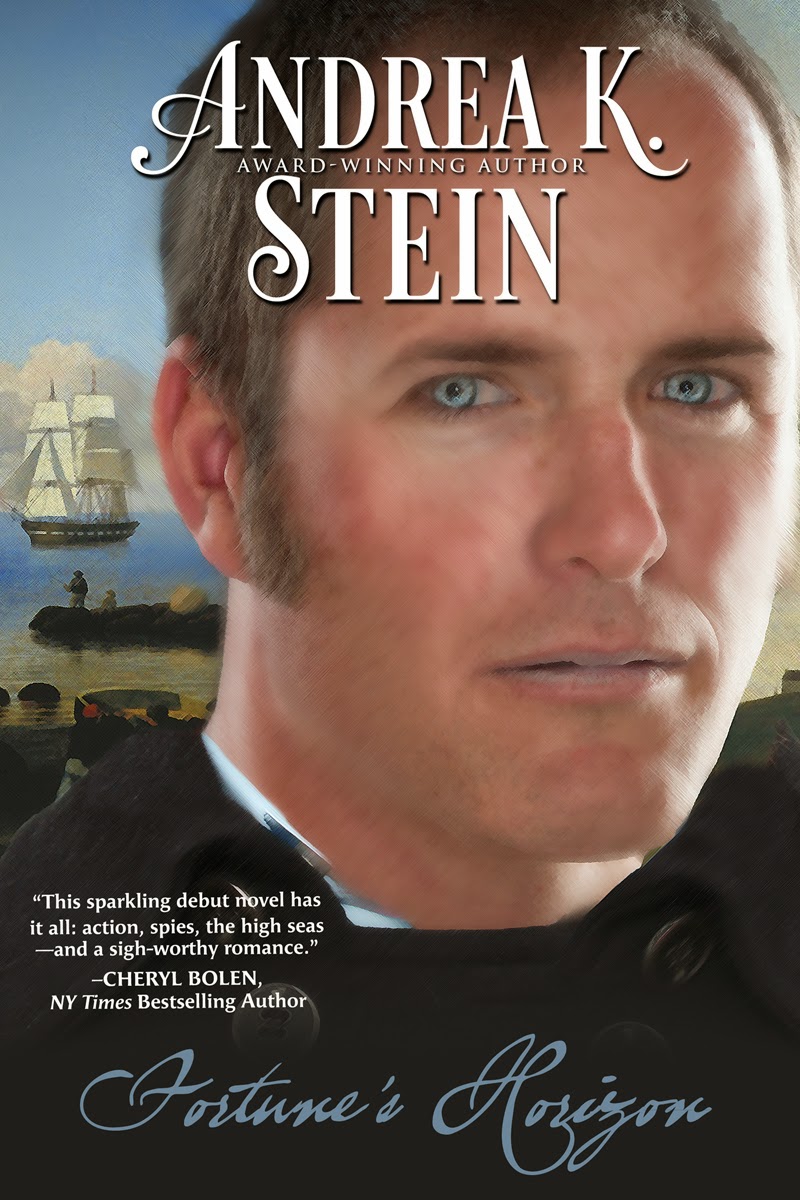 Fans of Danielle Harmon's Heroes of the Sea series will love FORTUNE'S HORIZON—a humorous, high adventure historical romance from debut author Andrea Stein in which a spoiled American heiress tangles with an arrogant British sea captain on a mission for the Confederacy on the high seas.

Help welcome Andrea K Stein to the wonderful world of romance and celebrate her debut novel, FORTUNE’S HORIZON.  Andrea is doing a month long blog hop to celebrate and she is super excited to share her stories with you.  The blog hop features spotlight posts, reviews, interviews (both of Andrea and of her characters, Lillie and Captain Jack…and maybe others) and guest posts.

A really fun fact that helps set Andrea’s covers apart from all the other gorgeous covers in the historical romance world—her cover model isn’t really a cover model at all.  Andrea wanted to do something different, something special.  So, she asked some local heroes to help her out.  The model for FORTUNE’S HORIZON is an avalanche search and rescue specialist…who also trains search and rescue dogs.  With the help of the brilliant cover designer, Kim Killion, Andrea was able to have her vision realized.

She risks everything to deliver gold to the Confederacy.

Lillie Coulbourne marks time in Paris while the Civil War rages back home. While translating dispatches from the Confederacy for the French Finance Ministry, she accepts a spy mission through the Union blockade. When the captain of the only blockade runner headed back to a Southern port won’t deal with women, or spies, she sneaks aboard as his cabin boy.

He refuses to risk his ship, or his heart.

Blockade runner Captain Jack Roberts has never been caught and he’s not about to let a spoiled American heiress ruin his perfect record. After he discovers her deception, he fails miserably at keeping her at arm’s length and vows to send her packing on the first mail ship back to England.

When she surprises him with her skill as a seaman and navigator, he grudgingly allows her to finish the run. But ultimately, he has to choose what is closer to his heart – Lillie or his ship.

The moment he dismounted, she recognized the man. Lillie and Sarah exchanged silent looks of dread. This was the same tall Englishman who had held her in such disdain in Paris at the Devereaux mansion.

Maybe he wouldn’t recognize her, maybe—.

He walked directly to her side, leaned over, and wiped a finger across her mud-spattered chin.

Her stomach dropped. Could this be some horrible coincidence? He was a blockade runner captain, he would be sailing back into a Southern port soon. Please, God. Don’t let him be the same captain she would have to serve under.

Even as she sent that little prayer winging, she knew. In a few weeks she would have to work in disguise with this infuriating man. Every time she encountered him, he got another look at her.

As if he could read her thoughts, he took a firm grip on her chin, pulled a handkerchief from his pocket and dabbed at the worst of the mud coating her face. After wiping as much as he could with the cloth, he moistened his thumb and rubbed away the remaining evidence.

“Not perfect, but it will have to do.”

“My lord —” She started to object to his ministrations and tried to jerk out of his hold.

“Just Jack, please.” He stared at Sarah and directed his questions to her. “Miss Devereaux, perhaps you can explain to me how your hoyden friend managed to get herself into such a state.”

“We were on our way to spend the weekend at Clarendon when we were delayed by this unfortunate accident.” Sarah shifted her gaze between Lillie and Jack. Then she added somewhat lamely, “The rest of our party in the other two carriages did not see the accident, and so, she was just trying to help.”

“Right.” Abruptly releasing her, he turned toward the two drivers. He hitched his horse to the team and then stripped off his riding coat. His vest followed, and then he rolled up his shirtsleeves.

Relieved at no longer being held and cleaned like a small cat, she stepped back to take her place behind the wheel to help push and stared expectantly at him, waiting for his command to lean in.

“What do you think you are doing?” He strode over and pulled her to the side of the road where Sarah stood.

“I’m going to help,” Lillie said. “Do you want to get us out of here or do you want to wait all day for another man to come along?”

“How old are you?” He ignored her question entirely.

“Why should it matter?” Why did he have to tower over her so? With the late afternoon sun slanting behind his head, she couldn’t gauge the expression on his face.

“Can you not answer a simple, civil question?”

“I will be twenty in June, sir. Why would a gentleman ask such a question?”

Daddy was a trucker, Momma was an artist, and I'm a scribbler. The stories just spilled out—the pony escaped, the window magically shattered. Not my fault.

Twenty years as a journalist couldn't stifle the yarns. Yacht delivery up and down the Caribbean only increased the flow. Now those tales celebrate romance on the high seas.

I am a professional captain living in the Rocky Mountains, just about 15 minutes from the Continental Divide. I spent the last 12 summers teaching sailing on awesome Lake Dillon at 9,017 feet in Summit County, Colorado. I also captained tours for my business, Sails in the Sunset.