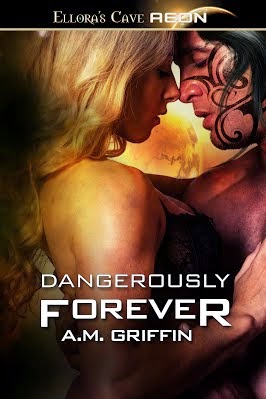 Being kidnapped by a deadly—and dead sexy—brothel slave wasn’t exactly what Kiehle Xochis signed up for. His instructions had been simple: Watch over the human female until his brother and his mate arrived to rescue her. Instead, the slave has decided to liberate herself. She’s proving to be more than Kiehle can handle—and he kind of likes it.

Allysan Miller has gone through hell since being taken from Earth during an invasion. She’s finally found a way to escape the latest, and worst, of the brothels she’s been sold to. Now if Ally plays her cards right, she could gain both freedom and love…if she can learn to trust the dangerous male she’s chosen as her hostage.

nside Scoop: Ally suffers her share of abuse at the hands of a brothel owner’s guards. But don’t worry. The feisty female warrior gives as good as she gets.

By reading any further, you are stating that you are at least 18 years of age. If you are under the age of 18, please exit this site.
An Excerpt From: DANGEROUSLY FOREVER
Copyright © A.M. GRIFFIN, 2014
All Rights Reserved, Ellora's Cave Publishing, Inc.

The nerve of him.

She balled her fist and punched the padded post with all her might. It made a thumping sound but didn’t waiver. Sweat dripped from her scalp and down her face. Her clean clothes were damp and beginning to cling to her body. While the morning sun wasn’t yet high in the sky, without proper shade there was no relief from it.

She made a quick turn and smacked the post with the back of her hand with a grunt. She could hit the thing as hard as she could and didn’t have to worry about it bending or breaking, especially since Kiehle used this very post for training. A bead of sweat rolled down her forehead to her eyelid. Using her shoulder, she wiped the sweat away and peered up at the sky. She couldn’t even guess what time it was. She had no clue how time was tracked on this planet. All she knew was that it was early. Everyone was still sleep—even Kiehle.

At the thought of him, she leaned to the side, brought her leg up and thrust her foot out to kick the post. She’d been hitting and kicking since she’d gotten up. Well, since the sun had come up. She hadn’t slept a wink last night.

All because of him.

While Yoshi and Max had slept soundlessly, she’d tossed and turned. Unable to keep her eyes closed, she’d spent most of the night staring at the ceiling.

She grunted and punched the post again. Her fist made a dull sound as it hit the padding that covered the wood.

She’d done the right thing, shutting the door on him. She smiled to herself, thinking about how his face must’ve looked.

She spun and landed an elbow, pretending it was his face.

That’s what he gets. Assuming I’ll want to fuck him.

She bobbed and weaved, pretending she was avoiding his outstretched hands.

Then, with a left uppercut, she hit the post where she assumed his chin would be.

The only reason she’d had sex with him in the first place was to plot her way to freedom. Well, maybe not the first time. The first time she had wanted too. But the second time was definitely to plan her escape.

She brought her hands up to shield her face and bent her knee, bringing it back. Then with a fierce cry, she kicked out, landing the bottom of her foot where she pretended his kneecap was.

I’ll cripple him if he bothers me again.

When she’d finally gotten up this morning, the house had been quiet. She’d peeled Yoshi’s leg from across her stomach and Max’s arm from around her neck. Although the bed could easily sleep six, they’d both stuck to her side as though still in her small bed from the brothel. She’d retrieved her clothes from the washer and tiptoed to his closed door to listen. She thought she’d heard him stir inside but when she listened more, she didn’t hear anything else.

She’d rested her hand on the door, trying to decide if she should push it open and go to him. All that stood between her and the possibility of riding him like a cowgirl was a door.

One that she would not open.

Instead, she’d dressed and left the house, hoping a few laps around the structure would tire her out. That’s when she’d come across what looked like a workout area. Exactly what she needed to get rid of all the pent-up energy that overwhelmed her.

She spun and hit the post with her elbow.

She took deep breaths. Her chest heaved. “Can I say no?”

She flicked her hand in the air. “Then I guess I don’t have a choice.”

He pulled his shirt over his head. His perfectly chiseled chest and arms glistened under the sun. He began to stretch out the muscles in his upper body, over-exaggerating his movements. “Mmm, I need a good stretch.”

Her body immediately went soft at the sounds.

He closed his eyes and straightened his arms up to the sky, making his muscles ripple, and moaned again. Her mouth watered as her eyes roamed his chest, his nipples, his stomach and the happy trail of hair that ran from his chest to his waistband.

She tilted her head to the side. His body… I can touch it.

A bead of sweat formed below her nose and rolled over her lips. She licked it away. I would love to lick him.

Wait? What am I doing? Ogling him again. Holy hell.

Flustered at being mesmerized by him, yet again, she turned and focused her attention back on the post and practiced fighting combinations. Not giving in to the temptation to turn and watch him more.

From the corner of her eye, she saw him crouch low to stretch his thighs. The material of his pants stuck to every fine muscular line.

She gave her head a light shake. There’s no need to focus on that…that…monstrous thing.

He moved to her side and assumed a fighting stance, crouching low with his arms out, his smoldering lavender eyes trained on her. His face was framed by thick dark hair that hung a little past his shoulders. Good gracious, he was gorgeous.

She gave him a look of indifference. “We’re sparring?”

“Unless you think I might be too much for you to handle.”

He didn’t know what he was walking into. She’d spent the morning thinking of ways to knock him on his back—and not the way he was probably thinking of now.

She twisted her hair into a knot on the back of her head. He didn’t make a move to do anything with his. Hanging loose, it made him look primal…dangerous…sexy.

She narrowed her gaze. He must think that every female around him should swoon like a schoolgirl. He really didn’t need to take off his shirt to advertise his perfect body and that stretching performance had been way over the top. Now his hair was blowing around his face as if he were some kind of alien Fabio.

She looked around. Where the hell is all this wind coming from? “Are you planning to tie back your hair?” she asked, trying her best to sound annoyed—not aroused.

“I had not planned to.” Smiling, he added, “Unless you find it too distracting.”

A. M. Griffin is a wife who rarely cooks, mother of three, dog owner (and sometimes dog owned), a daughter, sister, aunt and friend. She’s a hard worker whose two favorite outlets are reading and writing. She enjoys reading everything from mystery novels to historical romances and of course fantasy romance. She is a believer in the unbelievable, open to all possibilities from mermaids in our oceans and seas, angels in the skies and intelligent life forms in distant galaxies.

Where you can find me: