Author Interview Whispers from the East by Amie Ali 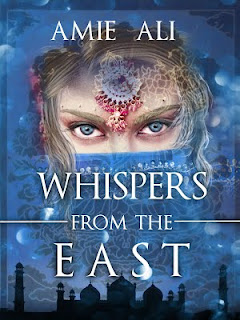 Ammi, a pregnant 24-year-old, flees New Delhi with millions of Muslim migrants in the early hours of the 1947 Partition of India, clawing her way through a controversial caste system and into the heart of Lahori society.

A family broken by betrayal.

Two of Ammi's beloved sons immigrate to the United States and secretly marry dazzling, contemporary American brides. One bride converts to Islam. The other commits apostasy, the sin of all sins.

Three women who stand to lose everything.

The collision of two belief systems—two worlds—come to a head as Ammi, Carolyn, and Ivy fight to keep their own marriages, families, and futures secure.

Amie Ali's stories focus on the lives of Western women who find love among the cultural breadth of Middle Eastern, North African, and South Asian countries. Weaving western expectations of love and family with extensive cultural and religious differences, she enjoys writing stories that bridge divides and offer a peek into these diverse, often controversial relationships.

Do you plan everything or just let the story flow?

I'm a pantser and not a planner. I fly by the seat of my pants, but have a notebook I scribble into while writing so I can remember dates...but that's all the planning I can commit to.

I don't think I would like characters that didn't!

Fried chicken. Served with a side of shame.

I am totally a morning person. It annoys the heck out of my husband, who is the ultimate night owl.

I'm actually on my fourth passport in under ten years...I travel a ton! I'm an American who lives in Europe, so I've ticked a lot of boxes by zig-zagging. My heart pulls me to Africa frequently, and the food in the Middle East and South America knock my socks off. The most awe-inspiring place I have ever been is in the shadow of Mount Everest. The only place I probably can't go and would love to is to the moon.

They consume them, almost as another character.

It is, to put it very simply, a short chronicle of the married lives of three women—a South Asian mother and her two American daughter-in-laws—through cross-cultural and interfaith relationships. Each woman gets to tell her own story from her own perspective, and together they form the patchwork of the whole novel.

I think the biggest thing I have learned about both writing and publishing is that, between the first draft and the final, with all the editors and readers and input, there are a handful of uncredited authors for every good book. There may only be one name on the cover, but the final product is not the result of just one person. And that's the truth.

It's always a learning process. When you learn, you grow—and there is no growth without change. There are probably a hundred things I should be doing differently, and I'll find all that out as I continue to grow.

Women in general have influenced my writing. Their life, their love, their hopes, their expectations, their families. Land has also influenced my writing. If there is a corner of the world I can see and then put a character in, you better believe you'll know what the water tastes like there by the time I've finished.

When I felt overwhelmed at first my mentor told me that, no matter what, write a page a day. If you write one single page a day, in a year you will have completed a full novel. This is what I parrot to anyone starting out. Just keep writing and, if nothing else, crank out your page a day.

What are three words that describe you?

HA! But really...I don't. Can you wait a minute while I ask my grandma?

My favourite book is The Scarlet Letter by Nathaniel Hawthorne. I read it as a teenager as part of the required school curriculum, and I think that was the turning point for me in my love of literature.