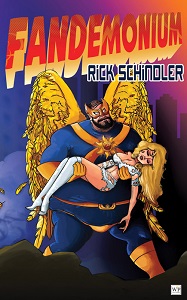 Ray Sirico used to have it all. Once, he was the brilliant and outrageous Clown Prince of Comics, who reinvented the venerable superhero Skylord, and ranted and rollicked everywhere from TV talk shows to Hollywood premieres.

But that was in the ’70s and ’80s. Now it’s 1993, and Sirico is a drunken has-been. His wife has left him, his movie flopped, and his comics’ publisher is doing so poorly that its new corporate parent has come up with a radical marketing stunt: the Death of Skylord.

Still, Sirico has one last chance to recapture the limelight: Fandemonium, the nation’s biggest fantasy convention. But others are coming to the con too: Harmony Storm, the sex-crazed actress who broke up Ray’s marriage; his former collaborator Tad Carlyle, who now has his own company, and a troubled relationship; Fred D’Auria, a fanboy fleeing adolescent traumas, and corporate conspirators who are plotting to sacrifice Sirico’s greatest creation for motives deeper than even his fevered imagination could conceive.

Together, antihero Sirico and his superhero Skylord stand at the crossroads of comics and commerce, where quirky creators, fervent fans, conniving businessmen and preening celebrities converge. Deal-making, drug-dealing, lovemaking and truth-telling all collide at the riotous climax of a fateful weekend that leaves no one unchanged.

Fandemonium uses the colourful world of comics and fantasy as a microcosm and metaphor for media consolidation and the excesses of global mass culture. It is at once a hilarious satire of business and society, a portrait of an artist no longer young, and a sometimes poignant look at a universal challenge: to grow up, face the world, and put away childish things.

Once words had flown free as birds from his fingers. Now it had taken days for just two to come crawling out like tiny snails: The end.

Still, what wonderful words they were. How neat their symmetry on Sirico’s screen, how sweet their taste on his tongue as he spoke them silently like a prayer. This called for a toast. He raised his chin, emptied the tallboy down his gullet, and erupted a hearty belch.

Yes, a promising start. He clattered on before his momentum could flag:

The end of Skylord, who lies fallen at the feet of the maniacal Baron Brain atop the villain’s Tower of Fear as it stabs the heavens like an obscene gesture in the face of God!

He could already hear Lenny howling about that one. Mustn’t offend the cherished beliefs of any inbred, slack-jawed yokel who might chance to pick up a copy of Skylord along with his chewing tobacco at the corner Shop N’ Go in Mooseturd Hollow. Well, tough shit.

The end of life, as the Baron’s diabolical Chrono Cannon stains the skies with sinister energies like the chimney of hell itself! The end of hope, as the Soaring Sentinel faces his fateful final battle!

Fakeful final battle, more like; just the idea of comics’ greatest superhero being killed was preposterous, even if Skylord was going to return miraculously from the dead after a few perfunctory months of suspended publication. Hell, Sirico could come up with a dozen ways for Sky to beat the Baron in the time it took him to pee. In fact, he decided, he would, just for exercise. 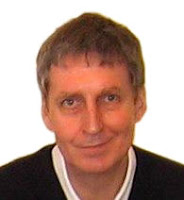 Rick Schindler is an award-winning journalist and a lifelong comics fan and collector. He is an editor, writer and producer for NBC News Digital. Fandemonium is his first novel.

2 paperback copies of Fandemonium for giveaway.