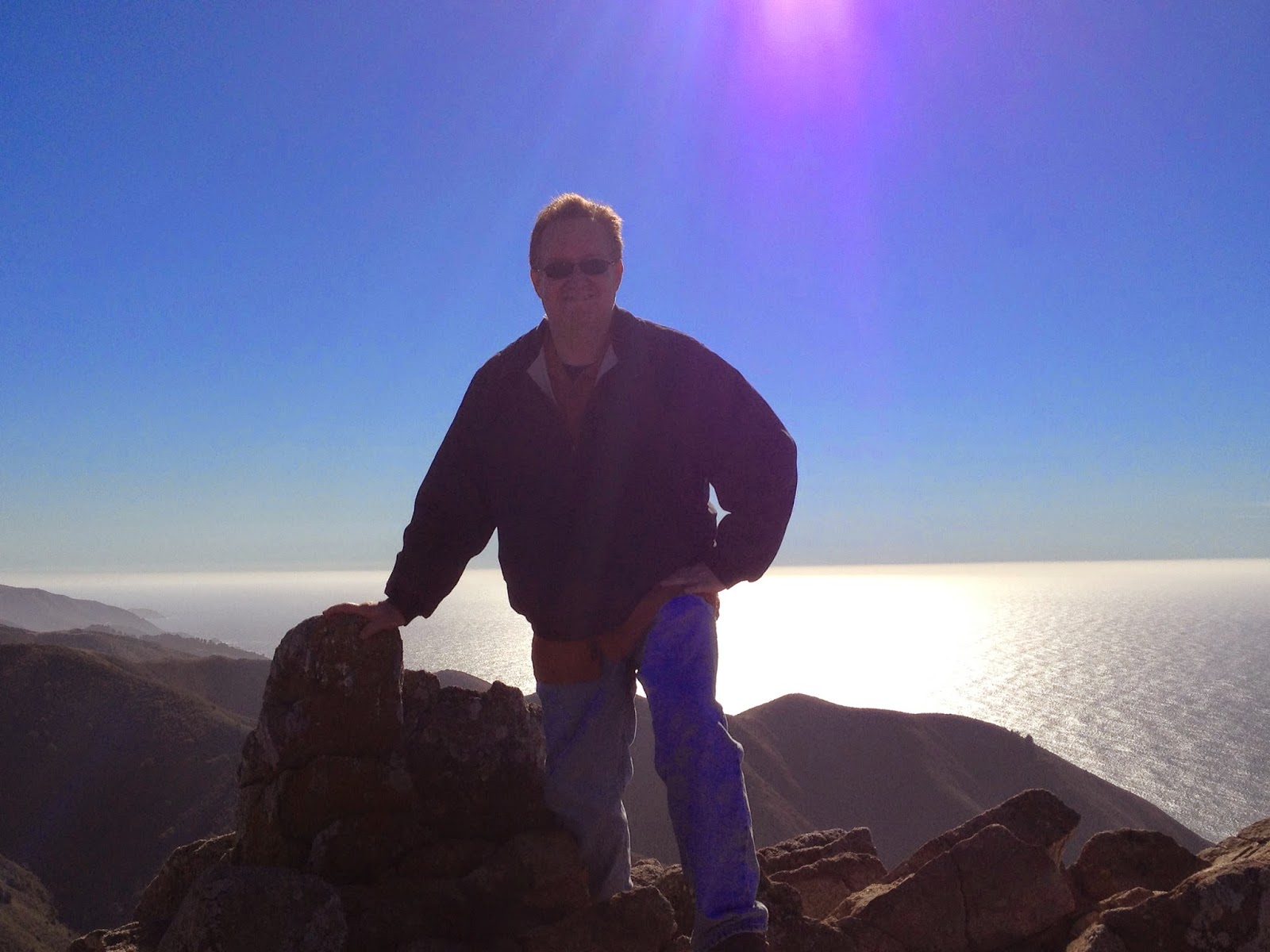 Sidney Stone is a hiker, deer whisperer and non-pretentious wine connoisseur. An addicted reviewer on Yelp, he is also creator of affordable housing (although technically he is homeless part-time), thinks The Replacements are the best band of the Eighties and loves to boost his LinkedIn count with people he doesn't know.

He lives in both Northern and Southern California while constantly traveling to Orange County to visit his son, who can now beat his father at ping pong and chess rather easily (and is charmingly arrogant while doing it). A graduate of UC Irvine and Pepperdine University, Sidney wishes he chose at least one university to attend that had a college football team to root for.

The first scene Sidney thought of for Jennifer Ainsley: The Final Demon War included a rather large massacre (take that for what it is worth). However, inspired by the works of Stephen King, Dean Koontz and Clive Barker; the book's violence is offset by dark humor and deep human emotion just like in real life where Sidney's darkness is offset by creatively placed sarcasm and an overwrought romanticism. For example, while Jennifer Ainsley: The Final Demon War is a Fantasy-Horror novel, Sidney also still tears up at the end of both Field of Dreams and An Officer and a Gentleman.


Do you plan everything or just let the story flow?

Thank you so much for featuring my book on your blog! At the beginning of this story, and the four screenplays I previously wrote, I outline the tale from beginning to end.  However I am not a slave to the outline.  I let inspiration guide me. So while I may know where the road begins and ends, I’m not always sure how many detours I will take to get to my final destination.

All the time  when your lead villain is a fallen angel who has been alive for billions of years, he tends to always think the story is just about him ;) Seriously though, that’s where outlining the story helps so that you do not get sidetracked too much along the way.

This is a tough one!  I eat out all of the time and I’m an avid reviewer on Yelp:

My favourite go-to food would have to be pizza, thin crust. But I also love American BBQ...baby back ribs and tri-tip.  Yet, I’m becoming a bigger fan of sushi and sake (they must be combined). Hmmmm, I’m not sure I can answer this! :)

Unfortunately I’m a night owl which really upsets Daytime Sidney as he is always tired ;)

I’ve been to Europe once and I’m dying to go again. France, Italy, England, Spain, Denmark, Germany. I also cannot wait to do an African safari, visit the South American rainforest and save my pennies to go to Antarctica. A lot of travelling in my future indeed :)

Not so much in the first Jennifer Ainsley book. It primarily occurs in the United States.  However, in the second book, the epic scale and ambition exponentially increase and the story will take place all over the world.

Yes!!!  That is a must...Classic or Modern Rock, Classic soul or classical music.  I guess I’m a classicist ;) Beethoven’s 9th is wonderful for inspiring great battle action scenes! And nothing beats Otis redding when writing a lovemaking scene :)

Jennifer Ainsley: The Final Demon War is the first book in a planned trilogy.  It is a tale of love and loss that uses supernatural elements to illuminate truths about the “real” world. Here is some background on each of the characters:

Jennifer Ainsley: She lost her beloved mother and sister in a mysterious car crash when she was a child, the same night billionaire Jonathon Tait had a vision she was the one to wield the Sword of Jesus (Matthew 10:34 Do not suppose that I have come to bring peace to the earth. I did not come to bring peace, but a sword) against the demons. Adopted by Jonathon and raised wiith his twins to love them like she did her sister, Jennifer knows nothing of her destiny until the night of her college graduation party. Also manipulated by Jonathon to fall for the Head of Tait Security Andrew Walker, the coming storm will engulf her and she may yet lose even more than she already has.

Jonathon Tait: 170 year old billionaire who in league with the demons, has become the richest, most powerful man in the world. The murder of his second love, plus the love of his children, begin to place Jonathon on the path of not redemption; but at least a way to save the two people he loves the most.

Mpordock: The leader of the Demons.  A fallen Angel who also had forsaken the Underworld to wage a final battle against humanity. Disdainful of Lucifer and yet craving the acceptance of the God who cast Mordock out of Heaven, Mordock thinks that if he destroys humanity (like God himself almost did with The Flood) maybe God will recognize him and maybe Mordock can become holy again.

Andrew Walker: Like Jennifer, Andrew lost his family in a tragic accident and that shared past has given them a fierce, passionate love. Their initial lovemaking scene illustrates how much they are in love with each other and how much they would protect one another. But Andrew, one of the few living men to have killed a demon, is not an experienced demon fighter and may be over his head in the coming war.

Mike Davis: The government operative most skilled in killing demons, he is known throughout the world has having the greatest luck in remaining alive when so many other soldiers like him, including a former lover, have perished. Spying on Jennifer while also attempting to protect her, he falls in love with her but realizes this will always be unrequited. Jennifer will always be in love with Andrew which causes Mike to take terrible risks yet also give him an unwavering strength as he wants to do right by Jennifer.

Andrew and Sophia Tait: Jonathon’s twins who were an unexpected surprise birth. Jonathon loves them so much he betrays his alliance with the demons. As the conflict grows though, Jonathon and others begin to realize the twins may have an even greater destiny than Jennifer. And if Mordock finds that out, all could be lost.

The promotion part is the trickiest thing to navigate.  And I do not quite understand why authors want to give away the hard work they do for free or for .99? That is just not sustainable from an economic point of view.  Especially if you want your books read and the stories enjoyed.  At those prices, too many people just fill up their Kindles without actually reading the books.

I spent a lot of money on worthless promotion that did nothing to really promote my book.  I’d promote it a bit differently if starting over but I have learned a great deal that will help me promote the second book more efficiently.  I have enjoyed the book blog tour that i have done and that has increased awareness.

I grew up very poor and ended up dropping out of High School. To escape I read a lot of early Stephen King, Dean Koontz and Tolkien. Eventually I got myself together, worked myself through college twice and eventually ended up with a Masters Degree in Urban and Regional Planning. The humble upbringings, the strength to persevere and those early writers all influence my writing to some degree. I hope I was able to combine the darkness with the light, while adding in deep characters, that will enable readers to become fully invested in my stories.

Be professional especially if you are an independent writer.  Invest in your craft, invest in editing, invest in a great cover, invest in formatting and invest in your talent. Don’t sell yourself and other writers short too by always reaching for the easy fix of giving your stuff away for a quick few dozen book copy sales. It devalues reading and it devalues the writing.

What are three words that describe you?

As I wrote above, I love early Stephen King and early Dean Koontz.  I devoured Watchers in a weekend I enjoyed that Koontz book so much. I guess I would have to say that the Tolkien Lord of the Rings trilogy would be the work I would take to a desert island and consider my favourite.

Jennifer Ainsley: The Final Demon War is my first book.

Thanks again for the book feature and interview! 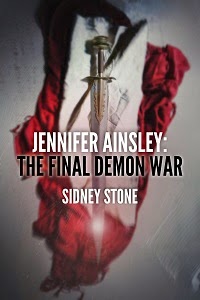 Demons are preparing to launch the Final War to destroy humanity.

Can one young woman wielding the Sword of Jesus ensure our survival and redemption?

Will she lose both her love and her soul in the process?

Available at Amazon in Paperback and Kindle formats