Guest Post by Louise Caiola
The Truth about Publishing

I still recall the day I attended my first Writer’s Conference. A biggie. In New York City. Wherein there was a PitchSlam with literary agents, motivational speeches and an impressive lunch spread. I remember thinking this was IT. From here on out I would be a REAL writer, what with my hob-knobbing with the author-elite. That was my initial misconception. One of the keynote speakers, an author who has been published many times, opened her presentation with the line, “Are you guys SURE you want to do this?” She proceeded to paint a particularly gruesome picture of an industry fraught with frustration, rejection, long periods of loneliness, half-truths, and biting subjectivity. This woman was clearly mixed up. Perhaps she’d had a bad morning. Run in the pantyhose. Turbulence in first class. Who knew?

Not I, apparently. Not then. Fast forward five years and I have learned. Those things she had mentioned. ALL TRUE. Well, I’ll be. If you are an emerging writer, sunshiney and new, I apologize for being a momentary dark cloud on your blissful publishing horizon. However, this is a realistic heads-up. You will thank me later.

1) Prepare to be frustrated more than you have ever been in your entire life. Waiting. Wondering. Watching grass grow. Fun times? Not so much. Publishing is S –L –O –W go.

3) Loneliness. Writing is largely a solitary task. Your best friends will become the words on a page. Those guys don’t throw a lot of parties or go to the mall with you.

4) Half-truths. At some point in your publishing quest you will begin to interact with other writers/agents/editors and the like. Their stories and claims will have all the mish-moshed ingredients of goulash. It will be difficult to wade through. Trust in your gut. Believe what you see. Be from Missouri. “Show me.”

5) Subjectivity bites. Yes. Very much so. Every single person has a different definition of good literature. Editors will sweetly scar you for life if you allow it. Develop a thick hide. Be ready to embrace these alternating opinions. Chocolate helps.

There you have it. I implore you – don’t kill the messenger. I’m a sister soldier in this same publishing battle. Yet, after all is said and done I will leave you with this sage advice: Anything you want badly enough is worth suffering the hell-fires of fate to achieve.  Forge ahead fiercely. 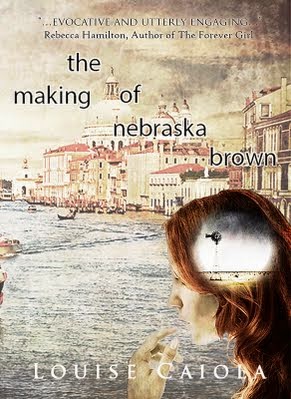 The last thing eighteen-year-old Ann Leigh remembers is running from her boyfriend in a thick Nebraska cornfield. This morning she’s staring down a cool Italian sunrise, an entire continent from the life she once knew. The events of the eighteen months in between have inexplicably gone missing from her memory.

All at once she’s living with Tommy, an attractive, young foreigner asking for her continued love. Though he’s vaguely familiar, she recalls a boy named Shane in America who she reluctantly agreed to marry. Juggling a new world while her old one is still M.I.A is difficult enough without the terrifying movie scenes spinning a dizzy loop in her mind: glimpses of a devastating house fire, a romance gone wrong, an unplanned pregnancy, and a fractured family – each claiming to be part of who she once was – a girl and a past somehow discarded.

Ann Leigh must collect the pieces of herself to become whole again, but she doesn’t know who to trust especially when Tommy’s lies become too obvious to ignore. And above all, her heart aches to discover what became of the child she may or may not have given birth to.

The Making of Nebraska Brown tells the story of one girl’s coming apart from the inside and the great lengths she’ll go to reclaim herself and find her way home.

As a young girl who spent her allowance on Nancy Drew mysteries, Louise realized that one day, she might have a story of her own to tell. Maybe even more than one story. After years focused on raising her children she eventually reconnected with her passion for creative writing. She soon began to craft a large collection of short stories which were published in the inspirational online magazine, Faithhopeandfiction.com. Shortly thereafter, she authored her first novel, Wishless, a contemporary YA, released in 2011.

Louise devotes a portion of each day to honing her skills. She has several other novels currently in various stages of development. A confirmed bibliophile, Louise enjoys reading outdoors on a warm spring day and watching her pup chase leaves on a breeze. She looks forward to meeting others who share her love of the written word and invites you to visit her blog, her website and follow her on Twitter and Facebook.