Book Spotlight & Giveaway: The Girl/ The Sanctum by Madhuri Blaylock 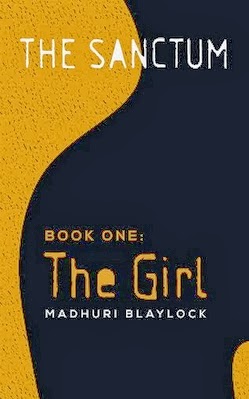 The Sanctum, an all-powerful governing body founded by ten families, entrusted to maintain the peace amongst Magicals and ensure the ignorance of humans, has been corrupted by greed and savagery for generations, but is all Wyatt Clayworth has ever known.

A descendant of one of the Founding Families and Class A Warrior, Wyatt has always believed in the ways of The Sanctum, having grown up in the system and thrived under their leadership. A golden boy, renowned for his prowess and skill in battle, Wyatt has never questioned a mission or kill order until the night he crosses paths with a brutally injured and mysterious girl.

Scouring Central Park with his best friend and fellow Class A Warrior, Ryker Morrison, for the hybrid demon prophesied to bring an end to The Sanctum and destroy the world for Magicals and humans alike, Wyatt instead finds Dev and his whole life turns upside down. Told he was hunting a killing machine, hellbent on wreaking havoc and destruction upon all it encounters, Wyatt instead sees nothing more than a broken girl with haunted eyes and a bit of a death wish.

All Dev wants is for Wyatt to either kill her or leave her alone. When he refuses to do either, she finds herself being pulled into his life while being hunted by warriors everywhere she turns. Drawn to one another for reasons they cannot begin to explain to themselves, much less anyone else, Wyatt is determined to protect Dev and help her realize her mission to avenge the deaths of her family at the hands of The Sanctum. His abdication of his duties and his outright rejection of his responsibilities to The Sanctum create a maelstrom of events beyond anyone’s imagination.

Without making a sound, Wyatt quickly found the exact place he was seeking. Ducking under some low-hanging tree branches, he ventured into the dark, partially-hidden lair only to be met with a less-than-welcoming blade at his throat. Dev had moved slightly from the hiding place Wyatt left her and although the lower half of her body remained immobile, her arms were functioning just fine, as evidenced by the blade drawing a thin trickle of blood from Wyatt’s neck. One wrong move and she would certainly kill him.

Wyatt slowly brought his hands up to Dev’s, wrapped his fingers around hers and painstakingly maneuvered the blade away from his neck. Only then did he dare make eye contact with her.

“You didn’t really think I was just going to leave you here, did you?” Wyatt asked as he moved to retrieve his blade from Dev.

She wasn’t quite ready to give it up and slashed at Wyatt’s outstretched hand, managing to nick his wrist.

“Crap!” Wyatt sat back on his heels, holding his wrist, and laughed, “fair enough. I deserved that. I should have told you I was coming back, but I couldn’t risk Ryker overhearing or suspecting anything. Trust me, if he thought I was coming back for you he would have spent all night watching me like a hawk. So I left you and walked away and it worked. Now get over it and give me back my blade.”

Despite the laughter in his voice, Wyatt wasn’t playing. He wanted his blade. Her name was Odara and she had been handed down the Clayworth line since the witnessing of The Code of Ten. She was sharper than any Raven blade and fit his hand like a glove. Many had fought and died at his hand thanks to Odara. She was his protector and he wanted her back where she belonged, safely strapped to his hip.

"Kill me," Dev offered the blade at a price.

Wyatt stood up tall and glared down at Dev, clenching his jaw in irritation.

"Kill me," Dev challenged him again, taunting him with her smug stare and grim request.

With blinding speed, Wyatt landed on Dev, knocking her to the ground. Before she even realized what was happening, he locked down her arms and liberated his blade from her grasp. Wyatt hovered above Dev, inches from her face, momentarily tempted to slice her throat and end all of this drama. She couldn’t move a muscle.

"You are in no position to bargain with me," Wyatt angrily whispered, never taking his eyes off of hers. "I am faster and stronger than you. So don’t even think about toying with me like that again.”

Wyatt pushed himself off of her, replaced Odara at his hip and grinned mischievously. “For the record, my blade isn’t worth your life. I just want it back. And I asked nicely the first time.”

Dev remained in her prone position, staring up at Wyatt, uncertain of her next move. She didn’t have the strength necessary to pull herself into a seated position and she definitely was not going to ask for help.

“What?” Wyatt stared down at Dev, knowing she needed help to get up but determined to make her ask for it.

Even in the darkness, Dev could see Wyatt’s eyes sparkling with amusement. He was thoroughly enjoying this little moment between the two of them. His pleasure made her wish she had slit his throat when she had the chance. Rather than requesting his assistance, Dev focused every ounce of her energy on rolling over onto her stomach. If she could do that, she could easily pull herself into a sitting position, Wyatt be damned. She closed her eyes and focused every fiber of her being on the task at hand but nothing happened. Her body failed to react. It didn't even twitch. The body that had so beautifully saved her from certain death at the hands of those Sanctum fools just hours earlier now couldn't even roll over. She shook with frustration, wanting to scream to the heavens in rage, knowing such action was futile and beneath her. So she took a calming breath, opened her eyes and glared at Wyatt.

"Ahhhh, you're back. I was starting to miss your charming scowl," Wyatt bent low and absentmindedly pushed some of Dev’s hair out of her eyes, “was getting worried there for a second."

Dev grabbed his hand in her vice-like grip. She hated him and his snarky comments.

"I realize you don’t like me," Wyatt pulled his hand out of her grasp and gently placed his arms around Dev, helping her to sit, unable to look at her lying helplessly on the ground for another second, "but I'm all you've got so by all means, continue simmering in your hatred for me but do so with the understanding that I'm on your side.

"All this stabbing and cutting nonsense has got to end. If you want to hurt me, just imagine it, okay? Pretend. Don't actually do it. I heal quickly but it still hurts like hell."

"Now we've got to get out of here fast," Wyatt checked his watch, alarmed at how much time had passed since he jumped out of his window, "and you still can’t walk, which means I’m going to have to pick you up again. Whether you’re okay with it or not.”

He leaned back on his heels and waited, for some reason hoping Dev would respond, all the while knowing she would not. Dev listened with keen interest to every word coming out of Wyatt’s mouth. She most certainly didn’t like him, but she had to respect his determination. He fully intended to get her out of this park and to somewhere safe and against her better judgment, a tiny part of her was relieved. It was the same, small part of her that was fiercely drawn to him, like a sickness almost. And it was the part of her she most wanted to destroy.

Dev hardened her resolve, focused on her intense hatred for all things Sanctum and shut down.

For an instant, Wyatt thought he saw a spark in Dev’s eyes and just as quickly, it was gone. At that moment, for reasons unknown to himself, Wyatt resigned himself to a one-sided relationship with her, one completely based upon his will to help her. He stood up and reached for her, praying she didn’t have a blade hidden somewhere, knowing that if she did, this time she would definitely kill him. To his surprise, Dev wrapped her arms around his neck and allowed Wyatt to scoop her up and into his arms, but he thought nothing more of it, knowing full well she was merely using him to further her agenda.

And that was all right. 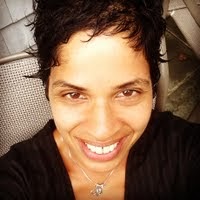 Madhuri Blaylock is a lawyer by day, writer and avid shoe and dress buyer at all other times. She lives in Jersey City, but her heart remains firmly planted in Brooklyn via Snellville, Georgia. Her husband, Henry, is also a lawyer, and only a lawyer because he actually likes being a lawyer (go figure), probably always wanted to be a lawyer and is really, really good at all things lawyerly. He's also pretty hot.

She’s got a big kid, Miss Sydney, and a little kid, the one and only Dash. They're awesome and fierce and supremely cool and able to make her laugh at the strangest things. She would love to add a dog, some chickens, a goat and a burro to this crew. Everyone needs a burro.

One day she plans to grow up. Right now, she’s enjoying the adventure.