Book Spotlight: Know When to Run by Connie Flynn 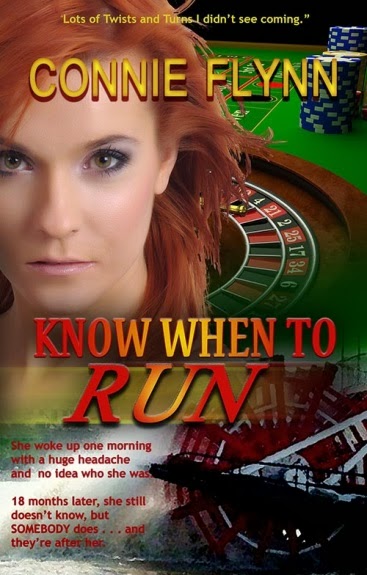 She woke up one morning on a Mississippi riverboat casino with a huge headache and no clue to who she was.

With the help of new friends she rebuilt her life. Now, nearly two years later, a tall dark man with killer good looks comes after her. A bounty hunter, who claims she killed her father then ran out on her bail. She says he's got the wrong woman. He says she's guilty as sin. One of them is right . . .

Suddenly so many people are after her, she can't tell the good guys from the bad guys. But one thing she can do is KNOW WHEN TO RUN.

Gabe came upon Ky being attacked by a man wearing a stocking mask and rescued her, although according to her she already had the situation under control. According to Gabe, she'd have gotten worse than a bruise on the forehead if he hadn't come along. The conversation takes place on one of the higher decks of the riverboat casino and Ky wants him to accompany her to the boat's security office.

"Back to my question," she demanded. "Why were you following me?"

"Truth?" He spread his arms as she widened the distance between them "I noticed you in the casino . . . and when I saw it was you walking by, I kinda, well, I’m a sucker for redheads and I wanted to see if we could share a drink, maybe get acquainted. Then that guy attacked you."

It was actually the truth and with some luck, his klutzy 'aw shucks' approach might get him in her good graces. Not that he should be spending his time this way when his fugitive was on the loose.

He was met with a long silence.

"About the state trooper's office," she finally said.

"Sure, Red," he said. "My pleasure." Not that he meant it, but this stand-off wouldn't be over until he agreed.

"Oh, good." She smiled and dropped the gun into a purse so frivolous and silly it made the goofy derringer look substantial then tugged lightly at the torn sleeve of her sequined top. "I’ll need to explain this."

"And probably the plume," he offered.

He grimaced. "Looks like the wrong end of a slaughtered clown turkey."

"Charming." She sounded sad. Gabe didn't have the heart to tell her that the blow to her forehead was going to turn purple then green in a few days, so he directed his eyes to her blouse, grazing a rhinestone name tag pinned to her collar.

Oh, dang. This was the man he'd been looking for.

"I've been hunting for you."

"I was told someone was asking. What do you want?" Unfriendliness crept back into her tone.

Should he risk the truth a second time? Gabe figured maybe, maybe not. Best to play it by ear. "It wasn't you, or not you, precisely. I've been tracking down relatives of an Evansville businessman who passed away last year.” He laughed lightly, because this part was true. "I thought Ky Taylor was a man. Obviously you aren—"

"Obviously. Besides, I don’t have any family. So obviously you've got the wrong person, mist—" She touched her bump and flinched. "What's your name?"

He gave a business card. "Call me McGregor."

"I'm looking for heirs and was told you might know someone named Kathleen Templeton. There's a reward for information that leads to finding her. Can you help me?"

"I’m asking the questions," Ky reminded him sharply. “Such as how—"

A muffled pop interrupted her. A nearby pillar spewed splinters.

"Down!" McGregor pushed Ky to the deck and flattened his body on top of hers.

“Get off me, get off!” Ky pounded his back. What the hell was he doing? Her shoulder smarted from the impact of the fall. Her tote had flown from her forearm, sliding out of reach. With a groan, she tried to shove McGregor away so she could reclaim it.

Was someone throwing stuff at them?

"Down! Stay down!" McGregor hissed.

"The gun has a silencer." He put a finger over his lips. "I don't think the gunman can see us down here."

He lifted his head.

Ky inched into a crawling position and couldn't resist stretching her neck for a peek. She caught a quick glimpse of a head and arm, then another shot hit the rail.

"Head down!" McGregor's voice was harsh, but the hand guiding her along the rail was gentle.

"Wish you'd let me get my tote," Ky grumbled. "The derringer's in there."

"Lot of good two bullets will do." McGregor inclined his head toward the entrance some fifty feet away. "When we get even with the door, make a run for it. Don't forget to stay low."

He reached up, apparently checking on the gunman, who was behind them now.

Whup, whup, whup, whup! Wood chips danced on the sleek deck. Ky glanced over her shoulder and saw a man in a hoodie creeping toward them. He raised his arm and let off another volley of bullets. Wood fragments peppered Ky's arms and legs. She tried hard, very hard, not to–"

With no warning, McGregor rocked off his knees onto his heels, swept her up from the deck, and lunged to his feet. Before she knew what happened, he dumped her overboard, then leaped in after her.

Her last word was lost in the muddy depths of the mighty Mississippi.

Cold and heavy with silt, the water swallowed Ky like a whale. She'd drown, she just knew she would drown. Feet kicking hard, arms frantically windmilling, chest burning, she aimed upward toward the light. Somehow she broke through the surface, still kicking and flailing, gasping for air.

Then McGregor had her. "You're okay, you're okay." 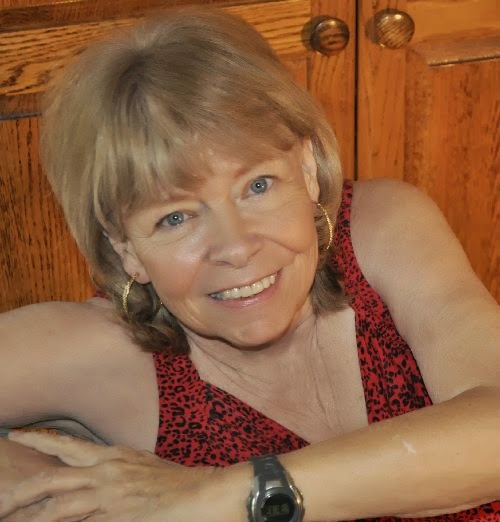 Award-winning, bestselling author Connie Flynn writes both long and short fiction and is published in multiple genres, including paranormal romance, romantic comedy, mystery and suspense and contemporary fantasy/sci-fi. She lives in Arizona on a lush green park where she walks her dog and escapes from the hot desert sun. Her latest release is the twists-and-turns romantic suspense, KNOW WHEN TO RUN.