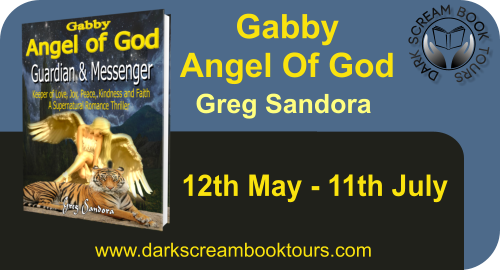 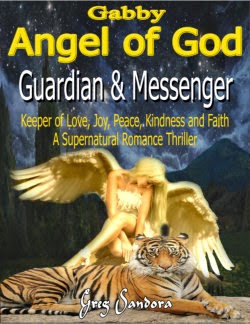 
Gabby, Angel of God is a Supernatural Romance Thriller that feels like falling in love!

The story starts out with a young widower, Bo, raising two small children and the three heartbeats that will change his life. Ride along as stunningly beautiful Gabby, takes this human man on the no-holds barred adventure of a lifetime!

If you’ve ever lost a loved one this story is for you!

A story of Peace, Love, Hope, Charity and the strength of Faith, you’ll love Gabby, Angel of God.

Gabby, is gorgeous, powerful, and able to take on forces that would make the most powerful armies turn and run for their lives. You’ll be addicted in no time!

Just when a young man feels he has lost everything he meets an angel and finds out that his life is just beginning. Gabby is an angel of God who shows him that life is always full of surprises, adventures and a lot more meaning than we can easily fathom. She shows Bo how to help others, be open to love again and find the hidden strength that lies within all of us. It is a story with heart and hope that will take you on an adventure of faith with one amazing angel.

Gabby, Angel of God will take you on one heck of a ride!

Gabby, Angel of God is a Supernatural Romance Thriller, it involves an angel, Gabby, short for Gabriella – Basically, a man during a visit to Bar Harbor, Maine encounters a beautiful angel named Gabby; quite accidentally, he is told – she wasn’t supposed to make him aware of her existence. His purity of spirit, kindness and capacity for love has revealed her to him. Naturally he falls hopelessly in love with the beautiful creature, as humans can not resist angels. The book is titled Gabby, Angel of God, Guardian and Messenger (Keeper of the Peace, Love, Hope, Charity and Faith. She’s quite something and they go on a quick but exciting adventure helping people in trouble. Gabby fits nicely in the Supernatural, Romantic Thriller, Paranormal and Time Travel genres.

The door chimes at the top of the old door rang, signaling our arrival. Other than the little bells jingling, everything seemed too quiet. I quickly surveyed the room sensing something was wrong. More often than not you would get a friendly greeting when you entered a store, especially in a small one-person shop. The shopkeeper would normally be so glad to see a customer or have anyone stop by. Not here, not today, something was off.

The store itself was normal – laid out the usual way with a few grocery isles to make the state happy. Maine has a stupid rule that small stores must stock at least a certain dollar figure of groceries in order to maintain a license to sell beer, wine, and cigarettes. That’s how the proprietor makes his money. To meet the requirement variety stores usually stock a few isles of dust covered groceries conveniently priced at three times normal. The right side of the store was reserved for groceries, leaving the left side of Zeb’s lined with a neat display of old- fashioned beer coolers. A dark oak, glass front counter had pride of the place at the back of the store. It was topped by and old-fashioned brass cash register.

What seemed odd to me was the way the shopkeeper continued staring straight ahead without saying anything. Not even a friendly, “What can I do you for,” when we walked in. A tall, heavy-set biker stood faced toward the counter between the closest beer cooler and the center aisle. His massive bulk, greasy ponytail, and leather vest made him look ominous. Gorilla hairy except for his shaved arms completely inked with skulls, daggers, and black lettering. The words so stretched over his skin you could barely make out the ink. I always give guys like him a wide berth.

“Don’t worry, Bo,” Gabby offered reassuringly as she walked straight up to the counter as if she hadn’t a care in the world. Standing side by side with the tattooed giant,

“Do you have Tab,” she asked. “My boyfriend would like one.” Her voice was so cute I had to smile. I loved hearing Gabby call me her boyfriend. Even if it was just for show, I played along.

The shopkeeper was shaking his head and biting his lip. I knew he wanted us to just turn around and walk away. The sooner the better, if I was judging his demeanor correctly. I was beginning to feel and sense things around Gabby. It felt like my brain was finally waking up from a long slumber and making connections that I never made before.

The big man turned to face my angel, towering over her, even in her heels. “They’re fresh out, Missy,” he barked, trying to intimidate, “Why don’t you and your little girly man save yourself the trouble, and just leave.”

The storekeeper’s eyes were pleading with us to go. Gabby was undaunted. She turned toward him, “Is that any way to speak to a lady, Wesley?” She asked so fearlessly. It was sexy. I’ve never seen anything like it and I was falling in love.

“How did you know my name you prissy little bitch?”

Gabby stood toe to toe with him. “The same way I know you’re wearing your mother’s underwear, you big pussy-ass fat bastard!”

She’d obviously struck a nerve. Wesley breathed in deep and stood to his full height puffing out his chest. He lifted his fat arm, exposing a grotesque wad of black underarm hair. He pointed a platinum-plated 44 magnum at Gabby’s face. “I’ve heard about a fucking-nuff out of you, whore!” He snapped red faced obviously embarrassed by her perceptive reading of him.Gabby looked at him with contempt. “Oh, shut your bad breath, foul smelling, ugly trap, Wesley, you big-girl phony.”

“Are you done? Slut!” He raged, “Who dies first,” he growled, “you or your little girlfriend.” He pointed the gun back toward me.

“You wanna go first, Fuck!?” He asked, “Or maybe I should let you watch while your little bitch bleeds. How would you like that, Princess?” He cocked the gun.

I was tiring of the fat man. I’ve been called wiry and rugged, even handsome, but never girly or princess. Gaby’s confidence inspired a supreme sense of calm. I was searching my memory for the right words, something droll to say. It wasn’t every day I had the protection of an angel of God. I wanted to say something that would impress her and make me sound cool, like Clint Eastwood. Before I could think of anything Gabby kicked her red heel high into the fat man’s chest, sending him flying into the closest beer cooler. With the force of a projectile, his body hit the back of the antique cooler, shattering through the glass doors and bursting the contents. Beer cans were flying out spurting everywhere, rolling past me squirting their foamy contents all over the floor. The heavy impact caused the store alarm to go off.

It all felt surreal. What’s wrong with this picture? There was a dead body, broken glass, beer spraying all over the place. A half hour ago I was lying down on the seat plank of a picnic table taking a nap, relaxing. Now I’m accessory to murder, with an angel. That’s going to be tough to explain.

Gabby turned to me, “Are you okay?”

I was flabbergasted. “I didn’t know angels killed people?”

“They don’t, Bo, that guy was already dead!” She whispered to me. Gabby looked at the body of the biker and whispered, “Jesus.” While the sweet fragrance of His name was still on her lips, a dark shadow left Wesley’s body, disappearing like black vapor through the sidewall of the store.

“It’s going to be fine.” Gabby reassured the man behind the counter. She went to him and took his hand, giving it a gentle squeeze. He was understandably very upset.

“You didn’t see anything. You don’t have to remember what happened.”

“I didn’t see anything,” he repeated her words, shaky and dumbfounded.

She turned to me, “Bo, we’d better go. You’re right; this would be tough to explain.”

“Did you know all this was going to happen?”

Gabby shrugged. “No, I usually get my orders just before He needs me.”

“Oh, you find out just before?”

Gabby winked at me. “Don’t worry, He never gives me more than I can handle.” 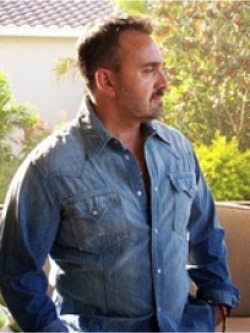 I’m originally from the Portland, Maine area and lived and worked there for years before moving to Southwest Florida.

My first book, Jack Canon’s American Destiny: He’s All In, is a Presidential Thriller, or some might say White House Mystery Thriller, packed with action and adventure.

I just completed the sequel to Jack Canon’s American Destiny – which is titled Jack Canon’s Women of the House: Love, Lust and Loyalty (A story of Kindness, Passion and Courage that can’t be separated. It’s has all of the same components of the first but leans toward a Presidential Romance, or White House Romance Thriller.

The sequel is just as action packed, but with a bit more spice than the first, some would say it’s very sensual. Anyway both are available on Amazon now.

My stories are full of adventures, thrills, and romance, are fast paced and even have some hilarious moments.

The Jack Canon series will eventually be about 7 books, book three is tentatively titled, Jack Canon’s Ghost Operative, it’s a Presidential Agent Thriller and deals heavily in the shady dealings of the CIA, Global Terrorism, and the do-what-ever it takes spy mentality. Anyway the attitude of President Jack Canon is to make things right, No matter what!

My hope is to have people read the stories and let me know their thoughts. My dream is to write full time and return to beautiful Maine in the Summertime while spending winters in Florida. I probably share that goal with a lot of people.

My Dad and Mom were artists, my father painted and my mother wrote poetry and loved to garden.

Most Saturdays we loaded up the 1970 Chevy Impala to trek to a one man show somewhere or other. I took a different track graduating with a business degree; owning and operating an Award Winning Franchise Fitness Center. Currently a professional manager I am living in Florida with my beautiful wife and children, and following my passion.

at May 20, 2014
Email ThisBlogThis!Share to TwitterShare to FacebookShare to Pinterest
Labels: blog tour, book spotlight, giveaway