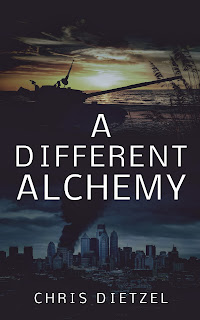 One man's loss mirrors an entire society's sorrow at their impending extinction. As the human population begins to decline, most people travel south to maintain a semblance of the life they know. Entire cities are abandoned. But following a senseless act of violence, one man travels north, toward forgotten lands. A DIFFERENT ALCHEMY is the story of a man realizing that everyone has their own pain and their own way of dealing with it. It is also a story about the importance of forgiveness.


A stream of black clouds swirled skyward from the stadium, hovering above it like the stormy portal to another world. The smoke was so great, so immense, that even from miles away Jeffrey expected to be able to hear the roar of flames. Instead, it was eerily quiet; the silence of being within the eye of a hurricane, the visible proof of destruction that came from being outside it. Not even the traffic, swarming all around him, seemed to make noise at that moment.

It was as if the entire world had gone silent.

The quiet was interrupted by his car radio. The staticky voice said the fire had quickly grown out of control until the blaze could be seen arcing over the top row of seats. Expecting to see flames spitting into the air, Jeffrey looked toward the stadium. All he could see, though, was the smoke.

“There are thousands of people gathered around the stadium,” the voice said. “It looks like some of the people were having another Block protest and others were celebrating the upcoming relocation to Washington. Some people are still holding up protest signs. Others are drinking beer and cheering.”

Protesting the Blocks was nothing new. From the moment it became clear that the only children who could be born would look just like other kids, but would be motionless, quiet, and unable to have children of their own, there were parts of society that resented having to accommodate the silent masses. This rally, though, had seemed different even before the fire started.

It had only taken Jeffrey a minute to leave the base and get back out to the main road. Once on the freeway, however, traffic had immediately slowed.

The voice came from the radio: “The fire is out of control now! There were thousands of Blocks in that stadium.”

Dear God, Jeffrey thought, please don’t let my boy be in there.

He dialed Katherine at home. The phone kept ringing until it finally went to the answering machine. He tried her cell phone. That also rang and rang. He called home again, then her cell again.

The entire time he couldn’t help but stare at the giant cloud of smoke. Everyone in the cars around him stared at it too. He turned the volume back up on the radio in the hope that the background noise would let him stop worrying about his wife and son.


Chris graduated from Western Maryland College (McDaniel College). He currently lives outside Washington D.C. His dream is to write the same kind of stories that have inspired him over the years.

In his free time, Chris volunteers for a Trap-Neuter-Release (TNR) program for feral cats. (If you would like more information on how best to care for abandoned and feral cats in your neighborhood, please check out the Alley Cat Allies website at: http://www.alleycat.org/)

Dietzel is a huge fan of Brazilian Jiu Jitsu (BJJ) and mixed martial arts (MMA). He trained in BJJ for ten years, earning the rank of brown belt, and went 2-0 in amateur MMA fights before an injury ended his participation in contact sports.


at January 15, 2014
Email ThisBlogThis!Share to TwitterShare to FacebookShare to Pinterest
Labels: book spotlight