Book Spotlight & Giveaway: Falling for Her Soldier by Ophelia London 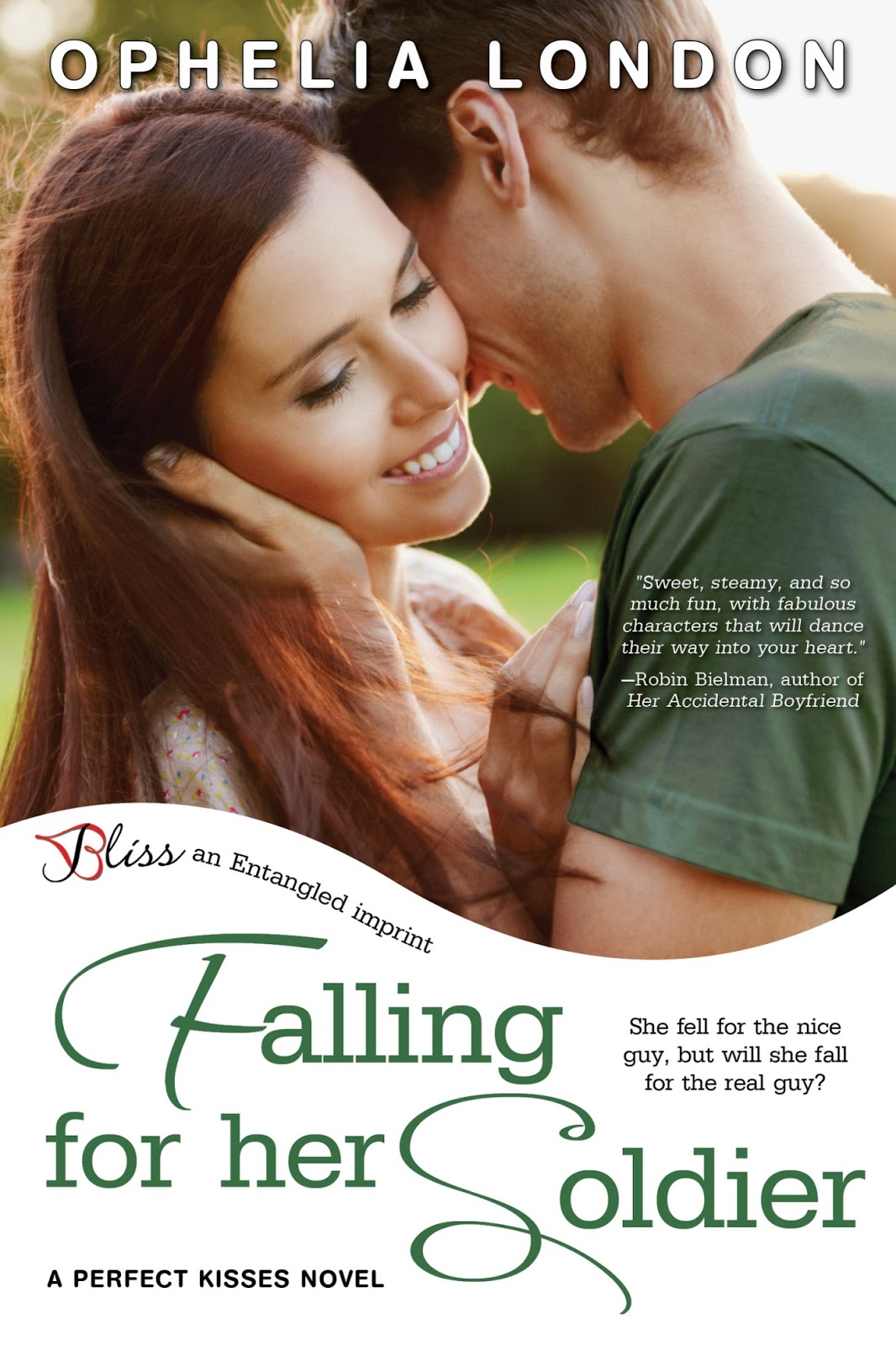 She fell for the nice guy, but will she fall for the real guy?

Ex-ballerina Ellie Bell has twenty-four days left until her self-imposed man-less year is up. No more falling for the wrong kind of guy—charming, sexy, bad. Why can’t she find someone sweet like Charlie Johansson, her soldier pen pal? His e-mails meant the world to her, and she can’t stop thinking about him…until she meets Hunter, whose muscles and cocky smile threaten to have her relapsing.

Before Charlie “Big Game Hunter” Johansson’s last tour of duty, he’d gone through women like crazy. But after connecting on a real, emotional level via letters with his best friend’s sister, Charlie’s ready for a relationship—with Ellie Bell.

But then her brother introduces him as Hunter. Proving he’s no longer a player by becoming Ellie’s dance partner for an Army benefit seems like it could convince both siblings he’s changed, but the harder he falls for Ellie, the harder it is to come clean. Can he convince her to fall for the real him before it’s too late?

“Did you always want to be in the Army?” she asked, genuinely interested in his answer. She’d often wondered what made people choose a military path, knowing how dangerous it could be but doing it anyway. Was it patriotism? Money for college? That obviously wasn’t Hunter’s reason, since he was still Army.

“I never considered it until I was twenty,” he said. “It was supposed to be just four years in and out, then finish college. Turns out it’s a good fit for me. I can’t imagine doing anything else.”

“Um, I know what you mean,” she said, jerking her gaze in the other direction before she started drooling. “I went to college but I haven’t really used my degree.”

“What did you graduate in?”

Hunter leaned against the table and smiled. “So that’s why you’re drawn to the patrons of the WS.”

“Exactly.” She laughed. “No one quite as childish as a soldier.”

“I’m kidding, of course. I don’t know how you guys do it. I hear stories from Sam…” She cut off, her hands automatically balling into fists of anxiety. “I can’t think about it. I can’t imagine.”

Hunter put down the book he was about to reshelve. “Then don’t think about it,” he said in a low voice. “That’s my job.”

A little glow lit beneath her skin and spread through her chest as his eyes locked on hers. Then she recalled what she’d told Jane last night, how she didn’t think she could get involved with a soldier, the sleepless nights, the blinding worry. But as she gazed at Hunter, she wondered if maybe…knowing people like him were out there, there wasn’t the need to worry as much.

“What you do is amazing.” She spoke around the lump in her throat. “Seriously, you don’t get thanked enough.” Her thoughts suddenly flew to her brother, and to the people
hanging out at the Warrior Station, and to all the other brave men and women who defended their country every day.

Without thinking, she went to Hunter, reached out, and took his hand. “Thank you,” she whispered, lacing her fingers through his. “From me. Thank you, with all my heart.”

His hand felt warm pressed against hers, more calloused than she was used to, but gentle. She squeezed it, feeling his strength as he squeezed back.

“Damn.” The word was an exhale.

“What?” She blinked up at him, getting an extra-close look at those golden rings around his blue eyes.

He closed his eyes for a moment, then pulled back a slow smile. “That should see me through my next deployment.”

Ophelia London was born and raised among the redwood trees in beautiful northern California. Once she was fully educated, she decided to settle in Florida, but her car broke down in Texas and she's lived in Dallas ever since. A cupcake and treadmill aficionado (obviously those things are connected), she spends her time watching arthouse movies and impossibly trashy TV, while living vicariously through the characters in the books she writes.

Ophelia is the author of DEFINITELY, MAYBE IN LOVE, ABBY ROAD, and the Perfect Kisses series including: PLAYING AT LOVE, SPEAKING OF LOVE, and FALLING FOR HER SOLDIER (Jan 2014).

But don't call when The Vampire Diaries is on.

ipod shuffle with the Falling for her Soldier playlist on it.