Have you ever been in the middle of a crowd where the noise was overwhelming, so many voices all at once?

Imagine hearing everything each person is saying and being able to hear what those people are thinking as well.  Having all their internal thoughts, the pieces that they aren’t saying out loud inside your head all at the same time.

I can multi-task better than most, but I wouldn’t be able to function with all of that going on at the same time. To carry on while doing something like the grocery shopping while having all of the other customers thoughts inside my head would have me standing in the middle of the store unsure of what to do next.

Ian from Inner Reflections has this very same ability and has even taken it a step further. Not only does he hear what everyone is thinking, but he can also go inside a person’s mind and search through it.

Can you imagine being able to do that?  I’m not sure if I’d want to know what’s inside someone’s head. 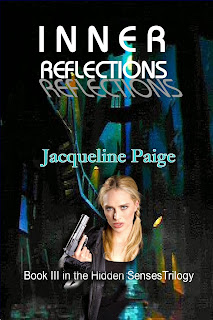 Detective Alec McGowan is dedicated to serving justice and will crush all that stand in her way. Long used to burying her passions after tragedy and heartbreak taught her that loving someone is dangerous, she expresses them the only way she knows how.  Passion for her job has landed her on a hit list, and rather than fearing death she is annoyed and more determined to find them before they find her.

Ian MacTavish is a loner and finds it easier to stay that way. The constant barrage of other people’s thoughts is exhausting, and relationships are even more troublesome for someone with his “talent”.  Using his skill has brought him considerable financial reward, and allowed him to stay uninvolved and unencumbered. When a night of harmless mind surfing leads him further into a twisted plot of chaos and murder, his appearance at the police station surprises him most of all.

Jacqueline Paige lives in Ontario in a small town that’s part of the popular Georgian Triangle area.  No one has ever heard of Stayner, so she usually tells people she lives “near Collingwood” and no, she doesn’t ski at Blue Mountain or at all, in fact she’s not even fond of snow.

She began her writing career in 2006 and since her first published works in 2009 she hasn’t stopped.  Jacqueline describes her writing as “all things paranormal”, which she has proven is her niche with stories of witches, ghosts, physics and shifters now on the shelves.

When Jacqueline isn’t working at her ‘reality job’ or lost in her writing she spends time with her five children, most of whom are finally able to look after her instead of the other way around.  Together they do random road trips, that usually end up with them lost,  shopping trips where they push every button in the toy aisle, hiking when there’s enough time to escape and bizarre things like creating new daring recipes in the kitchen. She’s a grandmother to four (so far) and looks forward to corrupting many more in the years to come.