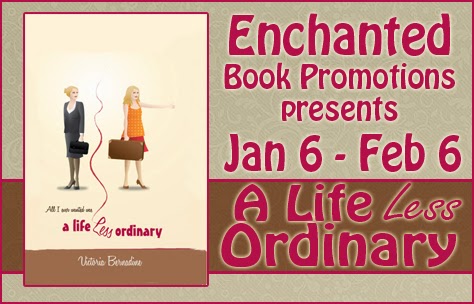 For the last fifteen years, Rose “Manny” Mankowski has been a very good girl. She turned her back on her youthful fancies and focused on her career. But now, at the age of 45, she's questioning her choices and feeling more and more disconnected from her own life. When she's passed over for promotion and her much younger new boss implies Manny's life will never change, something snaps. In the blink of an eye, she's quit her job, sold her house and cashed in her pension, and she's leaving town on a six month road trip.

After placing a personal ad for a travelling companion, she's joined in her mid-life crisis by Zeke Powell, the cynical, satirical, most-read – and most controversial – blogger for the e-magazine, What Women Want. Zeke's true goal is to expose Manny's journey as a pitiful and desperate attempt to reclaim her lost youth – and increase his readership at the same time. Leaving it all behind for six months is just an added bonus.

Now, armed with a bagful of destinations, a fistful of maps, and an out-spoken imaginary friend named Harvey, Manny's on a quest to rediscover herself – and taking Zeke along for the ride.

Manny walked in her door, looking tired and feeling worn out. She wondered ruefully why the only thing not on a schedule was the time she could leave the office. She dropped her purse on the table and hung up her coat and keys. With a tired sigh, she walked into the living room and plopped into the armchair. She closed her eyes as Harvey walked out of the kitchen with a glass of white wine and began to rub her shoulders. He again looked impossibly handsome, this time wearing a sweater and jeans. She sighed in imagined bliss, and looked at him with sad eyes.

You have no idea how much I wish you were real.

In a blink, he was gone–and the phone was ringing. For a split second, Manny considered not answering it.

There’s your chance to talk to a real person, Harvey murmured.

Probably Rebecca. Or Daisy. They’ll worry if you don’t answer.

All right, all right.

Manny heaved herself to her feet and walked to the phone.

She caught a glimpse of his grin as she answered the phone.

It was Rebecca, asking her to go out the next night.

“Oh, come on–you’ll have fun! And seriously–you haven’t gone out with us in months!”

“You’ve been tired your whole life I think. You need to break out of this rut you’re in! Come out for a few drinks and dancing with me and Daisy. Who knows, maybe you’ll meet a good-looking guy and be swept off your feet into a red-hot love affair.”

“I’d love to go dancing,” Manny said to Rebecca, “but the guy is just a figment of your imagination.”

“Only because you don’t put any effort into it. Seriously, it’s not healthy to do nothing but work and go home. That’s how people go crazy you know.”

“Huh. You mean next thing you know I’ll be talking to my imaginary friend?”

Harvey grinned wickedly and Manny abruptly turned her back to him.

“Yep–and sound like you’re actually looking forward to it, okay?”


Victoria Bernadine (a pseudonym) is, as the saying goes, a “woman of a certain age”. After twenty-something years of writer’s block, she began writing again in 2008.

Victoria enjoys reading all genres and particularly loves writing romantic comedy and post-apocalyptic science fiction. What those two have in common is anybody's guess.

She lives in Edmonton with her two cats (The Grunt and The Runt). A Life Less Ordinary is the first novel she felt was good enough to be released into the wild.


Win a $25 gift card of your choice by commenting on one of the tour blogs. All you have to do to participate is leave a comment, and you’re in the draw!